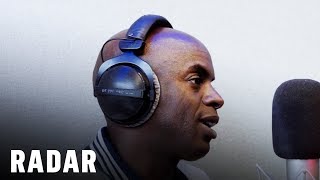 
Trevor Ricardo Nelson, MBE is an English DJ and presenter.


Born in the London Borough of Hackney to a family of St Lucian heritage, Nelson attended Central Foundation Boys' Grammar School in Cowper Street, Islington, London EC2, and Westminster Kingsway College. His first job was in a shoe shop, but his love of music meant a part-time role as a DJ.


Nelson found daytime work at a record importer in 1985, and widened his DJ experience putting on "warehouse parties" at the weekends.


He went on to work in A&R for record labels Cooltempo and EMI, promoting artistes such as D'Angelo, Mica Paris and Lynden David Hall; while also promoting events, including "The Lick".


As a pioneer in the urban music scene, Nelson started his broadcasting career as "Madhatter" in 1985 on London's Kiss FM, originally a pirate radio station, and after it gained a licence in 1990. Nelson was both a daytime DJ and director. Behind the decks Nelson cut his teeth as a DJ with Soul II Soul and promoted numerous club nights including Lick. With a stint behind the scenes in A&R at Cooltempo, EMI, Nelson was instrumental in the careers of D’Angelo, Mica Paris and Lynden David Hall. In 1996, Nelson moved to BBC Radio 1 to present the first ever national RNB show The Rhythm Nation and a year later began a Saturday afternoon programme which resulted in his winning a MOBO Award in 1997 as Best DJ. Nelson stayed at Radio 1 until 2013.


This article uses material from the Wikipedia article "Trevor Nelson", which is released under the Creative Commons Attribution-Share-Alike License 3.0.