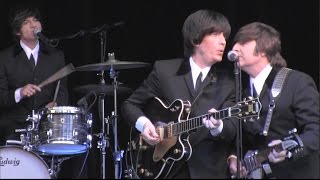 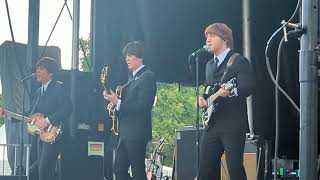 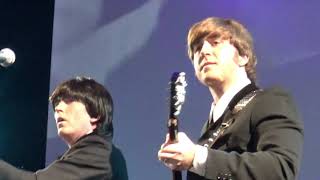 About The Fab Four

The Fab Four is a California-based tribute band paying homage to The Beatles. Founded in 1997 by Ron McNeil, a John Lennon impersonator, the group began performing Beatles music throughout southern California. They have played in many places worldwide, including Japan, Malaysia, France, Hong Kong, the United Kingdom, Germany, Australia, Mexico and Brazil, covering nearly the entire Beatles songbook and material from Beatles members' solo projects.


The band's beginnings included Tuesday night performances at a small venue called Music City in Fountain Valley, as well as regular performances at Disneyland's Tomorrowland Terrace in Anaheim, The Hop in Puente Hills and Scruffy O’Sheas in Marina del Rey. The core group consisted of McNeil , along with Ardy Sarraf , Michael Amador and Rolo Sandoval . From 2005 to 2008, The Fab Four brought in a second cast of musicians to help perform a full stage show six nights a week in Las Vegas, with various members alternating between cast. Performing as Fab Four Mania, the Vegas cast performed regularly at locations such as the Las Vegas Hilton,The Aladdin, The Sahara and The Riviera.


In 2013, the Fab Four received an Emmy Award for their PBS special "The Fab Four: The Ultimate Tribute," filmed at Pechanga Resort & Casino in 2012. As of 2019, the most common lineup formerly consisted of Ardy Sarraf , Adam Hastings , Gavin Pring and Joe Bologna .


As of 2020 & 2022, due to the COVID-19 pandemic, The Fab Four have been live streaming numerous concerts, with Ron McNeil, Rolo Sandoval and Erik Fidel coming back.


Formed by Ardy Sarraf, Wingsband is a Paul McCartney and Wings tribute act that covers many of McCartney's biggest post-Beatles hits. The band features Ron McNeil as Denny Laine, Michael Amador as Henry McCullough and Rolo Sandoval as Joe English, plus a horns section led by Wendell Kelly and singer/songwriter Christine Rosander as Linda McCartney. Both Laurence Juber, Wings guitarist from 1978 to 1981, and Denny Seiwell, the original Wings drummer from 1971 to 1973, have performed onstage with Wingsband at The Grove in Anaheim, CA.


George Harrison impersonator and Liverpool native, Gavin Pring, created a tribute act called George Harry's Son to celebrate Harrison's solo material, as well as his hits from the Beatle years. Pring has brought this act to the top Beatles music festivals, including the annual Beatleweek in Liverpool at the Mathew Street Festival and Abbey Road on the River in the United States. Pring also performed on the same stage as Paul McCartney in 2002 for the tribute show held on Harrison's birthday.


In 2007, The Fab Four was approached by Eric Idle from the British comedy group Monty Python to perform a set of shows celebrating the 30th anniversary of The Rutles, a Beatles parody group formed in 1975 by Idle and Neil Innes. The show featured McNeil as Ron Nasty , Sarraf as Dirk McQuickly , Amador as Stig O’Hara and Sandoval as Barry Wom , and was performed multiple nights in both Los Angeles and New York.


This article uses material from the Wikipedia article "The Fab Four", which is released under the Creative Commons Attribution-Share-Alike License 3.0.