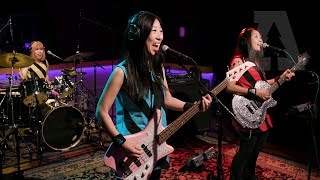 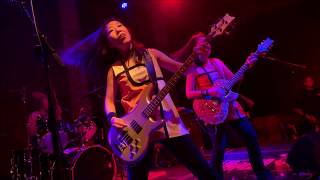 
Shonen Knife is a Japanese alternative rock band formed in Osaka, in 1981. Heavily influenced by 1960s girl groups, pop bands, The Beach Boys, and early punk rock bands, such as the Ramones, the trio crafts stripped-down songs with simple yet unconventional lyrics sung both in Japanese and English.


The trio maintains a distinctly underground garage rock sound rooted in D.I.Y. aesthetics. The band has been credited with making "the international pop underground more international" by "opening it up to bands from Japan". They have also performed as a Ramones tribute band under the name The Osaka Ramones.


Shonen Knife was formed in December 1981 in Osaka, Japan with sisters Naoko Yamano and Atsuko Yamano and their friend Michie Nakatani. Naoko sang lead and played guitar, Nakatani was also a lead singer and played bass and keyboards, and Atsuko sang backing vocals, played drums, and designed their stage outfits. The group was something of an anomaly when they started, as they were founded at a time when all-female bands were scarce. Eschewing the then-rising, early J-pop movement, Shonen Knife was influenced by 1970s punk rock and new wave bands such as The Ramones and Buzzcocks. They began to write energetic rock songs with rough, punky instrumentation, all the while embracing a do-it-yourself ethos. However, unlike traditional rebellious punk rockers, the trio emphasized positivity using catchy, upbeat melodies and frivolous, carefree lyrics that often dealt with sweets and animals. The group eventually came to describe their music as, "oo-oo-ultra-eccentric-super-cult-punk-pop-band-shonen-knife!" Shonen Knife performed their first gig on March 14, 1982 at Studio One, a club in Osaka, before an audience of 36 who paid 100 yen each. Later that August, they released their first independent album, Minna Tanoshiku, on cassette.


Following their first Tokyo gig at Hosei University, Shonen Knife released their debut album Burning Farm on Zero Records on July 21, 1983. They then contributed to the Zero Record compilation album AURA MUSIC which was released on November 15 and included three of their songs: "Watchin' Girl", "Banana Fish", and "Parrot Polynesia". Their second album, Yama-no Attchan, was released by Zero on May 25, 1984. Named after drummer Atsuko, the album saw the band growing as musicians. The album was also influenced by a broader selection of musical acts, ranging from Motown to heavy metal. Nevertheless, Yama-no Attchan maintained their penchant for lighthearted lyrical topics like bike riding and insect collecting. At the end of the year, Shonen Knife contributed "Parrot Polynesia" and "Elephant Pao Pao" to another compilation, Huddle No Trouble, for Balcony Records. Around this time, Burning Farm was first played on UK radio by English disc jockey John Peel, although Peel did not find out the name of the band until a few years later, in 1987.


Theoretically, any band that writes songs with lyrics such as "Banana chips for you!/Banana chips for me!/ In the afternoon, banana chips and tea" should have a life span no longer than that of a grasshopper. But something oddly spellbinding occurs when deceivingly silly lyrics are sandwiched between a buoyant guitar and a rapid-fire, pop-punk drum kit. Which perhaps explains why the Japanese female alternative rock /pop punk trio Shonen Knife is still singing songs about cookies, sushi, jelly beans, and, of course, banana chips, nearly 25 years after its inception. - The Boston Globe


By June 1985, the Burning Farm cassette had made its way from its Kyoto imprint to K Records of Olympia, Washington, who decided to release the cassette in the United States. A year later, on June 20, 1986, Shonen Knife released their third album Pretty Little Baka Guy. Four months later, the album was re-released with three additional live tracks. While their records had previously been available in the US solely through import, in 1986, Shonen Knife's track, "One Day of the Factory", appeared on a Sub Pop 100 compilation. The album was released on November 1, 1986 by the independent record label Sub Pop. Soon after, Shonen Knife began receiving lucrative offers from a range of US labels. By this time, many alternative rock groups had begun citing Shonen Knife as a favorite of theirs, and the resulting word-of-mouth created significant exposure for the band. On March 26, 1987, the trio's songs were played again on BBC radio by John Peel. After spending some time concentrating on their live performances, they had the opportunity to play with Sonic Youth as guests at the Muse Hall in Shinsaibashi, Osaka. Shonen Knife then embarked on their very first show abroad, playing at 2nd Coming in Los Angeles with the support of Thurston Moore of Sonic Youth and Jeff and Steven McDonald of Redd Kross. Shonen Knife's popularity with alternative rock musicians was perhaps best expressed in 1989, when over twenty different bands came together to record renditions of their favorite Shonen Knife songs for a tribute album entitled Every Band Has a Shonen Knife Who Loves Them.


This article uses material from the Wikipedia article "Shonen Knife", which is released under the Creative Commons Attribution-Share-Alike License 3.0.