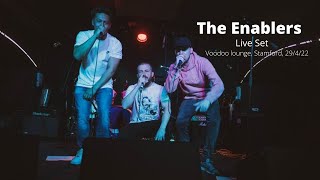 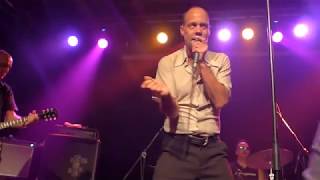 Enablers are originally a post-punk band formed in San Francisco, California which features the poetry/spoken word of Pete Simonelli. The current members now exist on opposite sides of the American coasts-- most of the time.


Enablers' first album, End Note, was released on Neurot Recordings in 2004. In 2006 they released their second LP Output Negative Space, ) and a split single with the band Redpanda.


After a short hiatus, following the departure of Joe Byrnes, Doug Scharin joined the band as drummer for the recording of the album Blown Realms And Stalled Explosions and for subsequent tours.


As of 2013 the band has toured and recorded with a new drummer, Sam Ospovat . Enablers' 2015 album, The Rightful Pivot, was released on the Atypeek Music, Lancashire and Somerset, and Exile on Mainstream labels, and was supported by European tours. Sam is no longer "new" in any sense of the word. His contribution as drummer and composer has continued through Enablers' last two releases, Zones & Pigeon Diaries .


INDY METAL VAULT July 2019: “Enablers have a sound all their own, though. The fluttering interplay between guitarists Joe Goldring and Kevin Thomson and the tight but emotive drumming of Sam Ospovat provide a backdrop for Pete Simonelli’s sharp tongue that ebbs dissonantly and flows serenely along with his lyrical slice-of-life tales.”


This article uses material from the Wikipedia article "Enablers", which is released under the Creative Commons Attribution-Share-Alike License 3.0.