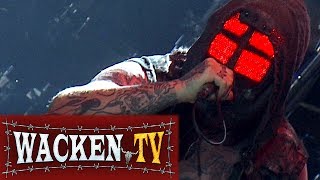 
Combichrist is an American aggrotech / industrial metal band formed in 2003 by Norwegian vocalist Andy LaPlegua, who also founded the bands Icon of Coil, Panzer AG, Scandinavian Cock and Scandy. Combichrist was formed in Atlanta, Georgia and is now based in Oak Hill, Florida. The band consists of only LaPlegua in the studio, with a changing lineup of live performing members. Releases by the band have been very successful in terms of sales and charted in top positions for dance and alternative charts worldwide.


The first material that LaPlegua wrote for the project was a power noise/techno crossover track Thanx to my Buddies under the moniker D.r.i.v.E for the Advanced Electronics Vol. 2 compilation. The song was later remade into Like to Thank My Buddies on Combichrist's album Everybody Hates You. The project's name was later changed to Hudlager and then finally to Combichrist before the debut album The Joy of Gunz was released on the German record label Out of Line. The band name came from a fanzine of LaPlegua's in the 1990s, with Combichrist being a character in it that was a "punk-rock messiah". The character would go on drug and alcohol fueled rampages, later healing those whom he had beaten. A few years after the band's conception, LaPlegua departed Norway for the United States, which is now the current home-base for Combichrist and his other projects Scandy, Panzer AG, and Scandinavian Cock.


Combichrist's first LP The Joy of Gunz was released in 2003. Sporting a fresh, original and aggressive new sound the brainchild of LaPlegua took the crowds by storm. On Halloween of the same year, the limited edition EP Kiss The Blade was released with 667 pressings which sold out in less than a week. In 2004, the second EP, Sex, Drogen Und Industrial, spent several weeks at number one in the DAC charts. At the same time that Sex, Drogen Und Industrial was released, a limited edition of 666 white-vinyl 12" pressings for Blut Royale were produced, and sold out quickly.


The year 2005 saw the release of Everybody Hates You and it was at this time that LaPlegua began labeling the music as "Techno Body Music" or TBM. The band released a song called "This is TBM" on the Out-of-Line compilation Techno Body Music volume 1. They played this song live during their 2005 shows, adding vocals to it. No vocal version of the instrumental track was ever released, and the lyrics were instead later reworked for the track "Electrohead". After this release, LaPlegua stopped referring to their music as TBM. Shortly after the release of the album, Army On The Dance Floor producer Kourtney Klein was added as alternating keyboardist and drummer to the band. The full-length album featured two tracks that became club classics "This Shit Will Fuck You Up" and "This Is My Rifle"and it was also the project's U.S. debut on Metropolis Records. Further benchmarks were set with the release of the 2006 EP "Get Your Body Beat" the title track of which landed Combichrist its first appearance on Billboard's Top 10 Dance Singles chart. The music video for the single was included on the DVD release of the biopunk film The Gene Generation with the song also being used in the movie. The band embarked on a North American tour with KMFDM soon after the release of the single.


On March 6, 2007, What the Fuck Is Wrong with You People? was released to some critical praise and popularity. The album featured 2006's break out single "Get Your Body Beat", it had an explosive barrage of corrosive beats, leering vocals, and acidic melodies. WTFIWWYP? was a high energy, adrenaline charged piece of sonic battery. Combichrist played on the Gothic Cruise in 2008, and released a limited CDr EP only available to ticket-holders. Limited to 200 copies, it contains seven tracks, of which six are exclusive.


Pull Out Kings producer and songwriter Z. Marr joined the band as keyboardist in January 2008 to begin work on the album Today We Are All Demons. According to an exchange with a fan, Trevor Friedrich of Imperative Reaction and formerly of Eighteen Visions, he was asked to join the band as a drummer with Joe Letz in October 2008. He replaced keyboardist Kourtney Klein, who began full-time work with Nitzer Ebb.


This article uses material from the Wikipedia article "Combichrist", which is released under the Creative Commons Attribution-Share-Alike License 3.0.