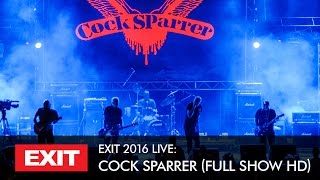 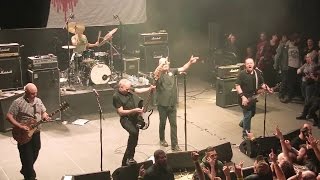 
Cock Sparrer is an English punk rock band formed in 1972 in the East End of London. Although they have never enjoyed commercial success, they helped pave the way for early '80s punk scene and the Oi! subgenre., Their songs have been covered by many punk, Oi!, and hardcore punk bands.


Their style is influenced by pub rock, glam rock and raw 1960s beat music as delivered by bands like the Small Faces and The Who. Their lyrics mostly deal with topics related to the daily lives of working class people. Their name derives from their original name, Cock Sparrow, a Cockney term of familiarity.


Cock Sparrer was founded by Colin McFaull, Mick Beaufoy, Steve "Burge" Burgess and Steve Bruce – who had known each other since the age of 11. Playing in nightclubs in and around London, they developed the style that was later to be known as streetpunk or Oi!, mixed with pub rock/R&B influences. In 1976, Garrie Lammin joined as second guitarist, and the band met with Malcolm McLaren, who was considering managing Cock Sparrer alongside the Sex Pistols.


In 1977, the band secured a deal with Decca Records, who were hoping to cash in on the now blooming punk movement. The first Cock Sparrer single was "Runnin' Riot", released in May 1977. It did not sell well, nor did the following single , and Decca dropped the band in 1978. The band members had already recorded an album's worth of material, which was only released in Spain as Cock Sparrer and was not officially issued in the UK until Razor Records released it in 1987 as True Grit. Cock Sparrer ceased activity in late 1978, with Lammin leaving the group.


In 1981, old Cock Sparrer songs were included on several Oi! compilation albums, and interest in the band began to rise again. They reformed in 1982 - with Chris Skepis replacing Gary Lammin as second guitarist - and signed to Carrere Records, which released the "England Belongs to Me" single. The next release was the band's debut album Shock Troops in 1983. It included the songs "Where Are They Now", "I Got Your Number"' and "Riot Squad." Beaufoy then left the band and was replaced by Shug O'Neill. Third album Running Riot in '84 was released in October 1984, after which the band ceased activity once more, although a "live" album recorded around this time was released in 1987.


The band performed several reunion concerts in 1992 , and in 1994 they released a new album, Guilty as Charged. In 1997, they released the album Two Monkeys. Since then, Cock Sparrer has occasionally toured and has performed sporadically at punk festivals including the Wasted/Rebellion festival. The band released their sixth studio album, Here We Stand, in November 2007. In April 2008 they headlined Rebellion Vienna and also headlined Rebellion Blackpool in August 2008. The following year Cock Sparrer headlined the Punk & Disorderly-Festival in Berlin. They also played Riot Fest in Chicago playing at the Congress Theater on 10/10/09 and headlined at the Metro on 10/11/09. They returned to play Riot Fest again in 2014.


This article uses material from the Wikipedia article "Cock Sparrer", which is released under the Creative Commons Attribution-Share-Alike License 3.0.