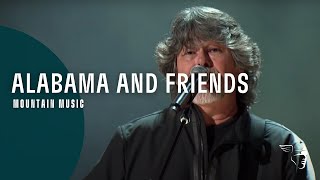 Alabama and Friends - Mountain Music (At The Ryman)
Share Concert


Alabama is an American country and Southern rock band formed in Fort Payne, Alabama, in 1969. The band was founded by Randy Owen and his cousin Teddy Gentry . They were soon joined by another cousin, Jeff Cook . First operating under the name Wildcountry, the group toured the Southeast bar circuit in the early 1970s, and began writing original songs. They changed their name to Alabama in 1977 and following the chart success of two singles, were approached by RCA Records for a record deal.


Alabama's biggest success came in the 1980s, where the band had over 27 number one hits, seven multi-platinum albums and received numerous awards. Alabama's first single on RCA Records, "Tennessee River", began a streak of 21 number one singles, including "Love in the First Degree" , "Mountain Music" , "Dixieland Delight" , "If You're Gonna Play in Texas " and "Song of the South" . The band's popularity waned slightly in the 1990s although they continued to produce hit singles and multi-platinum album sales. Alabama disbanded in 2004 following a farewell tour and two albums of inspirational music but reunited in 2010 and have continued to record and tour worldwide.


The band's blend of traditional country music and Southern rock combined with elements of bluegrass, folk, gospel and pop music gave it a crossover appeal that helped lead to their success. They also toured extensively and incorporated production elements such as lighting and "sets" inspired by rock concerts into their shows. The band has over 41 number one country records on the Billboard charts to their credit and have sold over 75 million records, making them the most successful band in country music history.AllMusic credited the band with popularizing the idea of a country band and wrote that "It's unlikely that any other country group will be able to surpass the success of Alabama."


Alabama was inducted into the Musicians Hall of Fame and Museum in 2019 and were awarded with the first ever Life Time Achievement Award from this institution.


Alabama was formed by guitarists Randy Owen and Jeff Cook, and bassist Teddy Gentry, three cousins born and raised near Fort Payne, Alabama, an area with strong country music roots. Owen and Gentry grew up on separate cotton farms on Lookout Mountain , learning guitar together and singing in church before the age of six. Gentry and Owen played in numerous groups during the 1960s, ranging from pop to bluegrass. Cook joined the band in 1969 forming the group Young Country, which first jammed together around Christmas. Cook also played in numerous other bands and was a rock and roll disk jockey. The three cousins all shared vocal duties, with another cousin, drummer Jackie Owen, completing the group's first lineup. The band's first performance was at a high school talent contest , for which they won first prize and tickets to the Grand Ole Opry. Despite this, all were too busy with prior commitments to pursue music: Owen still in high school, Cook working for Western Electric, and Gentry laying carpets full-time. The band grew further inactive when Cook went to college and Owen into the military.


The group became a professional band in 1972, adding drummer Bennett Vartanian and changing their name to Wildcountry. During this time, the group accepted a position playing at the nearby Canyonland theme park. The park would bring in established stars, such as Jerry Wallace, Bobby Bare, and Narvel Felts, and the band would back them, afterwards performing a one-hour dance set. After a while, with opportunities for the band slow to materialize, a discouraged Cook took a government job in Anniston, Alabama. Owen was studying English at Jacksonville State University, and Cook had an electronics job. The trio shared a $56-a-month apartment in Anniston, and worked to keep the band afloat with night and weekend gigs. The group decided to become professional musicians in 1973, and began performing at bars throughout the Southeast. In March, the band relocated to Myrtle Beach, South Carolina, performing six nights a week at a club named The Bowery for tips. They made their best money performing cover songs of Lynyrd Skynyrd and Merle Haggard. The group could not secure a record contract and began to self-finance recordings. The group borrowed $4,000 from a Fort Payne bank to record and release their own albums to sell at shows. Vartanian dropped out of the group, and following a rotation of four more drummers, they settled on Rick Scott in 1974.


This article uses material from the Wikipedia article "Alabama", which is released under the Creative Commons Attribution-Share-Alike License 3.0.