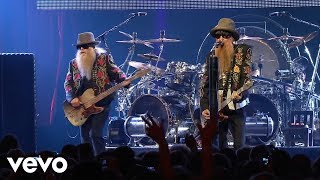 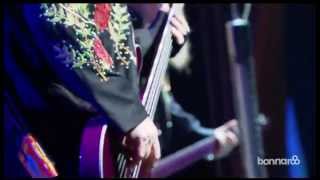 
ZZ Top is an American rock band formed in 1969 in Houston, Texas. For 51 years, the band comprised vocalist-guitarist Billy Gibbons, drummer Frank Beard and vocalist-bassist Dusty Hill, until Hill's death in 2021. Rooted in blues, ZZ Top developed a signature sound based on Gibbons' blues guitar style and Hill and Beard's rhythm section. They are popular for their live performances, sly and humorous lyrics, and the similar appearances of Gibbons and Hill, who were rarely seen without their long beards, sunglasses, and hats.


ZZ Top formed after the demise of Moving Sidewalks, Gibbons' previous band. Within a year, the members signed with London Records and released ZZ Top's First Album . Subsequent releases, such as Tres Hombres and Fandango! , and those albums' singles, "La Grange" and "Tush", gained extensive radio airplay. By the mid-1970s the band became renowned in North America for its live act, highlighted by its performances during the Worldwide Texas Tour from 1976 to 1977, which was a critical and commercial success.


After a hiatus, ZZ Top returned in 1979 with a new musical direction and image, with Gibbons and Hill wearing sunglasses and matching chest-length beards. With the album El Loco , the group began to experiment with synthesizers and drum machines. They established a more mainstream sound and gained international favor with Eliminator and Afterburner , which integrated influences from new wave, punk, and dance-rock. The popularity of these albums' music videos, including those for "Gimme All Your Lovin'", "Sharp Dressed Man", and "Legs", helped propel them onto the television channel MTV and made the band one of the more prominent artists in 1980s pop culture. The Afterburner Tour set records for the highest-attended and highest-grossing concert tour of 1986. After gaining additional acclaim with the release of their tenth album Recycler and its accompanying tour, the group's experimentation continued with mixed success on the albums Antenna , Rhythmeen , XXX , and Mescalero . They most recently released La Futura and Goin' 50 , a compilation album commemorating the band's 50th anniversary. By the time of Hill's death in 2021, ZZ Top had become the longest-running band with an unchanged lineup in the history of popular music. Per Hill's wishes, he was replaced by their longtime guitar tech Elwood Francis on bass.


ZZ Top has released 15 studio albums and sold an estimated 50 million albums worldwide. They have won three MTV Video Music Awards, and in 2004, the members were inducted into the Rock and Roll Hall of Fame. In 2015, Rolling Stone ranked Gibbons the 32nd greatest guitarist of all time. The band members have supported campaigns and charities including Childline, St. Jude Children's Research Hospital, and a fundraiser for the Delta Blues Museum.


The original line-up was formed in Houston and consisted of Gibbons, bassist/organist Lanier Greig, and drummer Dan Mitchell. The name of the band was Gibbons' idea. The band had a small apartment covered with concert posters and he noticed that many performers' names used initials. Gibbons particularly noticed B.B. King and Z. Z. Hill and thought of combining the two into "ZZ King", but considered it too similar to the original name. He then figured that "king is going at the top" which brought him to "ZZ Top".


ZZ Top was managed by Bill Ham, a Waxahachie, Texas, native who had befriended Gibbons a year earlier. They released their first single, "Salt Lick", in 1969, and the B-side contained the song "Miller's Farm". Both songs credited Gibbons as the composer. Immediately after the recording of "Salt Lick", Greig was replaced by bassist Billy Etheridge, a bandmate of Stevie Ray Vaughan, and Mitchell was replaced by Frank Beard of American Blues. Due to lack of interest from the major American record companies, ZZ Top accepted a record deal from London Records, the American affiliate of the British Decca Records label. Unwilling to sign a recording contract, Etheridge quit the band and Dusty Hill, Frank Beard's American Blues bandmate, became his replacement. After Hill moved from Dallas to Houston, ZZ Top signed with London in 1970. They performed their first concert together at the Knights of Columbus Hall in Beaumont, Texas, on February 10, 1970.


This article uses material from the Wikipedia article "ZZ Top", which is released under the Creative Commons Attribution-Share-Alike License 3.0.