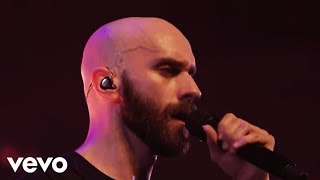 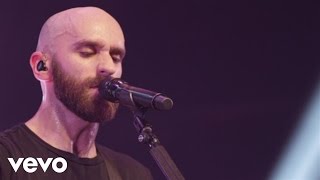 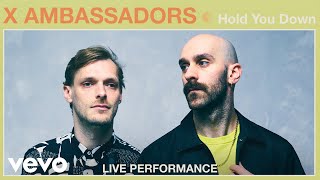 X Ambassadors is an American rock band from Ithaca, New York. Its members currently include lead vocalist Sam Harris, keyboardist Casey Harris, and drummer Adam Levin. Their most notable songs include "Jungle", "Renegades", and "Unsteady". The band's debut full-length album, VHS, was released on June 30, 2015. Their sophomore album, Orion was released on June 14, 2019.


X Ambassadors began as a band titled Ambassadors, touring with artists such as LIGHTS. During this time, they self-released their debut EP, Ambassadors EP, creating a music video for its lead single, "Tropisms", shot and directed by Rodrigo Zedillo. Shortly after, the band self-released its debut LP, Litost, which included the song "Litost", which would later be used on the soundtrack for The Host. The band signed a music publishing deal in 2012 with SONGS Music Publishing. The band started a Kickstarter account to shoot a video for the lead single, "Unconsolable", which would be re-recorded later. The group was noticed by Imagine Dragons while frontman Dan Reynolds was sick in the hospital in Norfolk, Virginia. Reynolds heard an acoustic version of "Litost" on 96X WROX-FM and asked Interscope to sign the band as soon as possible.


X Ambassadors released their debut major label EP, Love Songs Drug Songs in 2013. The EP included the track "Stranger" co-written by Dan Reynolds. In promotion of the EP they toured supporting Imagine Dragons, Jimmy Eat World and The Mowglis. In 2014, the band released a second major label EP, The Reason. In promotion of the new EP, X Ambassadors supported Panic! at the Disco and Imagine Dragons on their respective tours. They also featured in The Knocks' single "Comfortable" from their second EP with the same name.


On June 20, 2016, the band announced that Feldshuh would be taking an indefinite hiatus from the band to deal with personal issues.


X Ambassadors released four singles in 2017: "Hoping" in March, "Torches" in April, "The Devil You Know" in June, and "Ahead of Myself" in July. They also performed at the 2017 National Scout Jamboree. The band was featured in a song by Eminem titled "Bad Husband", off his album Revival. They also performed in a song titled "Home" on the soundtrack for the Netflix film Bright. The song includes pop singer Bebe Rexha and rapper Machine Gun Kelly. X Ambassadors released their next single, "Joyful", on January 26, 2018. Later that day they announced their second full-length album, Joyful, through their Instagram accounts, and pre-orders became available through their website. The album was slated for an April 2018 release. On February 2, 2018, the band released another single off the album titled "Don't Stay".


This article uses material from the Wikipedia article "X Ambassadors", which is released under the Creative Commons Attribution-Share-Alike License 3.0.