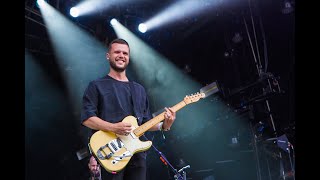 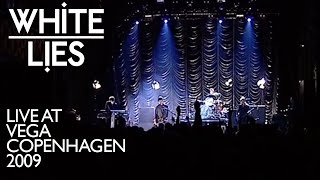 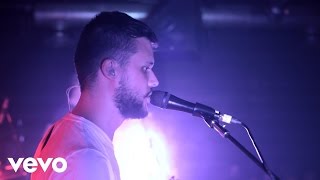 
White Lies are an English post-punk revival band from Ealing, London. Formerly known as Fear of Flying, the core band members are Harry McVeigh , Charles Cave , and Jack Lawrence-Brown . The band performs live as a five-piece, when they are joined by Tommy Bowen and Rob Lee.


White Lies formed in October 2007, after writing songs that they felt didn't suit their original band. After delaying their first performance for five months to build up media hype, they earned a recording contract with Fiction Records days after their debut. The release of singles "Unfinished Business" and "Death" led to tours and festival appearances in the United Kingdom and North America, including a headline performance at BBC Radio 1's Big Weekend and a place on the 2009 NME Awards Tour. At the beginning of 2009, White Lies featured in multiple "ones to watch" polls for the coming year, including the BBC's Sound of 2009 poll and the BRITs Critics' Choice Award.


Charles Cave and Jack Lawrence-Brown were both from Pitshanger Village in North Ealing, and first played together in a school show at North Ealing Primary School. Harry McVeigh ) joined them two years later, and they began playing under the name Fear of Flying at the age of fifteen. Cave described the band as a "weekend project", and one of many groups which they were involved in while at school. Fear of Flying completed one UK tour as a support act, as well as further slots with The Maccabees, Jamie T and Laura Marling. They released two double A-side vinyl singles on independent record label Young and Lost Club, "Routemaster/Round Three" on 7 August 2006 and "Three's a Crowd/Forget-Me-Nots" on 6 December 2006. Both vinyls were produced by former Blur and The Smiths collaborator, Stephen Street, whom they met through a friend at school. They went on to play the inaugural Underage Festival in Victoria Park, England on 10 August 2007.


Two weeks prior to the group starting university, they decided that they would take a second gap year, and perform new material which the band felt did not suit their current outfit. Cave stated that "I felt as though I couldn't write about anything personal, so I would make up semi-comical stories that weren't really important to anyone, not even me." Fear of Flying disbanded in October 2007 with a MySpace bulletin stating "Fear of Flying is DEAD ... White Lies is alive!", before introducing a darker sound and a new name that reflected their maturity. Cave stated that the band deleted their MySpace account "without any token farewell gigs". McVeigh said that the current musical climate had an effect on the split, stating that "Maybe a few years ago, we would have signed a deal and had a chance to make three albums . In the current climate...we’d have been dropped". When asked about the name change in an interview with a radio station in San Francisco, Jack Brown said that "We just thought that we should perform these songs as a different band. We had songs that we felt weren't suitable for the band that we were in and we thought White Lies would be the perfect vehicle for the songs."


Playing under the new name, White Lies played their first gig at Hoxton Square's Bar & Kitchen on 28 February 2008, supporting Team Waterpolo and Semifinalists. The band admitted rehearsing for two months for the gig, as well as putting off their debut for five months to gather media hype. Following this, the band received numerous record label offers, eventually signing to Fiction Records a matter of days after their first performance. The band also signed publishing rights to Chrysalis Music Publishing. The band said they chose the name because "white lies are quite dark...that's how we see ourselves." Receiving airtime on BBC Radio 1, Zane Lowe named "Death" his "Hottest Record in the World" on 5 February 2008, despite the song having never been officially released. Radio 1 would go on to feature the band at Radio 1's Big Weekend in May 2008, where they headlined the BBC Introducing stage.


This article uses material from the Wikipedia article "White Lies", which is released under the Creative Commons Attribution-Share-Alike License 3.0.