While She Sleeps Tickets London 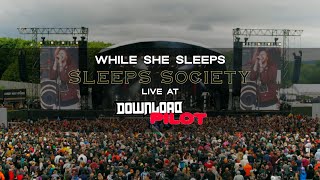 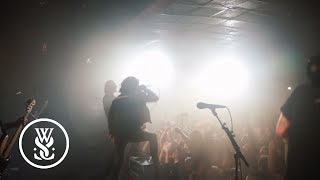 About While She Sleeps


While She Sleeps are a British metalcore band from Sheffield. Formed in 2006, the group consists of vocalist Lawrence Taylor, guitarists Sean Long and Mat Welsh, bassist Aaran McKenzie and drummer Adam Savage. They are currently signed to their own label Sleeps Brothers in the UK and in collaboration with Spinefarm Records in the US and UNFD in Australia. They have released three EPs, And This Is Just the Start, Split and The North Stands for Nothing, and five studio albums, This Is the Six, Brainwashed, You Are We, So What? and Sleeps Society. They received the Best British Newcomer award at the Kerrang! Awards 2012. The group has maintained the same line-up since its formation, with vocalist Taylor being the only bandmate who is not an original member. Despite this, he has still appeared on every release apart from the group's first two EPs.


While She Sleeps was formed in Renishaw, near Sheffield, England, in 2006 by vocalist Jordan Widdowson, drummer Adam Savage, bassist Aaran McKenzie and guitarists Mat Welsh and Sean Long. The group had played together in several bands prior to forming While She Sleeps and are described as being "best mates since school". In 2006, they released their first EP, And This Is Just the Start. This EP, however, was not released on a label. After a handful of live shows, in 2009 the majority of the group decided to focus on the band "full time". In March 2009, the band released a split EP with the band Andwhitestars through James Records limited to 100 copies. After this, vocalist Widdowson decided to leave the band due to work commitments. With the addition of vocalist Lawrence Taylor the band began working on material for their third EP in a home studio. From late 2009 through to 2010 the band toured heavily throughout the UK and eventually in to Europe. With growing public interest, the band finished work on The North Stands for Nothing which was released on 26 July 2010, through Small Town Records. The band held an album launch show on 24 June at The Plug in their hometown and followed its release with extensive touring throughout 2010, including an appearance at Sonisphere Festival. In October, they signed a deal with Good Fight Music to distribute their music in the United States.


Following the release of their mini-album – backed by their extensive touring – the band's popularity continued to increase and interest from media and labels grew. On 15 February 2011, the band recorded a live in session performance at Maida Vale Studios for BBC Radio 1. They also began to work on new material between touring, releasing the non-album single "Beve" through Good Fight Music on 15 March 2011. On 4 May, While She Sleeps were invited to open for Bring Me the Horizon in Sheffield at the O2 Academy. In the summer, they performed at several festivals throughout Europe and supported Bring Me the Horizon for two shows in Ireland at the end of August. While She Sleeps were invited to tour the US with Bring Me the Horizon in August through to October. However, While She Sleeps had to cancel their dates in the US, citing problems with immigration. In October, the band went on their first headline tour through the UK and Europe, with support from Bury Tomorrow and Feed the Rhino.


On 1 November 2011, While She Sleeps began working on their debut album with producer Carl Bown. First working in Chapel Studios in Lincolnshire, England, to record drums before moving to Treehouse Studios in Chesterfield, England, to record the rest of the album. After recording had finished, the band toured the UK in February 2012 as part of the Kerrang! Tour alongside New Found Glory, The Blackout, and Letlive. It was announced on 27 March, that While She Sleeps had signed with Search and Destroy Records to release their début album. On 4 April, Kerrang! magazine revealed that the upcoming album This Is the Six will be released on 6 August 2012 however the release date was later changed to 13 August. The title track "This Is the Six" was released as the first single from the album on 13 May. While She Sleeps are scheduled to appear at festivals and shows throughout the UK and Europe in the summer, including their first appearance at Download Festival. Followed by their first tour of Australia as direct support for House vs Hurricane, in late July and early August. On 7 June 2012, While She Sleeps won an award for Best British Newcomer at the Kerrang! Awards 2012.


Following the success of their debut album, This Is the Six, released 13 August 2012, While She Sleeps embarked on a full 9 date headline UK tour during September with support from Polar, Crossfaith and Bleed from Within. The band then embarked on a European Tour in the Fall, supporting Architects alongside Heights. While She Sleeps then joined Motionless in White and Betraying the Martyrs to support Asking Alexandria in their UK and European Tour. The band also played the Soundwave Festival across Australia during 2013. The band supported Parkway Drive across America and Canada during spring 2013. The band, following this, embarked on a short headline run of the UK when returning from the Parkway Drive tour. While She Sleeps were also confirmed on 4 January 2013 to be playing the entire length of Vans Warped Tour in America and Canada.


During Warped Tour, they confirmed they had started to write their second full-length studio album. The latter part of 2013 saw vocalist Taylor suffer from vocal problems, leading to the band cancelling shows into 2014 in order for him to undergo throat surgery and recovery.


This article uses material from the Wikipedia article "While She Sleeps", which is released under the Creative Commons Attribution-Share-Alike License 3.0.

While She Sleeps Tour