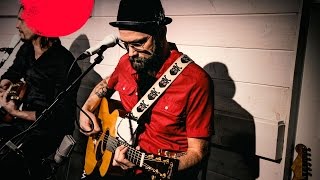 Von Hertzen Brothers is a Finnish rock group formed in 2000, by three brothers. Their music is a mix of classic rock and progressive elements, folk, punk and contemporary rock.


Each of the brothers have a notable history in the Finnish rock scene, starting from the early 1990s. Guitar-vocalist Kie von Hertzen has played in Don Huonot . Singer-guitarist Mikko von Hertzen is an ex-member of Egotrippi and Lemonator . Vocalist-bass guitarist Jonne von Hertzen won the National Rock Contest in 1998 with his band Cosmos Tango and later joined to play the bass in Jonna Tervomaa's band . From 2006 to 2016 the band had two other permanent members: Mikko Kaakkuriniemi on drums and Juha Kuoppala on keyboards. In 2017 the band returned to its 2006 lineup with Sami Kuoppamäki on drums. The current tour lineup also features the Swedish keyboard player Robert Engstrand.


The father of the brothers, Hasse von Hertzen, played guitar in an early sixties band called The Savages and later in The Roosters. Their uncle Lasse von Hertzen was a member of a well-known 1970s folk band in Scandinavia, Cumulus.


Von Hertzen Brothers released their first full-length album Experience in 2001 on which most of the instruments were played by the brothers themselves. Mikko played the drum parts as well as most of the main vocals. The album was released by an indie label, Zen Garden.


In the spring of 2006 the band released their second album titled Approach with Sami Kuoppamäki on the drums. The album achieved gold sales in Finland and won the "Emma" award for "Best Rock Album of the Year" in Emma-gaala, the primary recording industry awards event in Finland. The album's singles "Let Thy Will Be Done", "Kiss a Wish", and "Disciple of the Sun" gained notable airplay on Finnish radio and became the band's first hits.


On 14 May 2008 the band released their third album, Love Remains The Same which opened at No 1 on the Finnish national sales chart. The album remained No 1 for three continuous weeks and reached gold sales in two months. The band recorded the sessions at Dynasty Studios in Helsinki and a video studio diary is available of the recordings on YouTube. The release followed a full-length tour in Finland and shows in Italy, Denmark, Japan and The Netherlands.


In 2011 the band's own label, Doing Being Music, signed a licensing deal with Universal Music and after a three-year break the band released its fourth full-length studio album Stars Aligned. It was produced together with James Spectrum, known from his project Pepe Deluxé. The album opened at No 1 on the national album sales chart and later reached gold status. Due to the contract with Universal, the album was the first VHB album to be internationally published and distributed. Consequently, the band started touring abroad to eastern Europe and Scandinavia in support of bands like Pain Of Salvation and Opeth. Stars Aligned was especially well received in the UK and the band has played there frequently since. Some of their notable support performances include Foo Fighters, 30 Seconds to Mars, Neil Young and ZZ Top. In September 2011 the band and Rubik performed a unique sold-out show "A Night At The Huvila" based on the music of Queen.


This article uses material from the Wikipedia article "Von Hertzen Brothers", which is released under the Creative Commons Attribution-Share-Alike License 3.0.