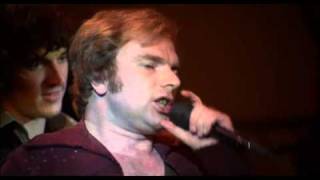 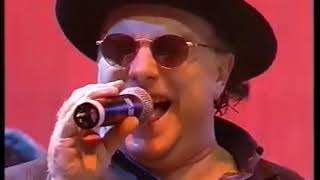 
Sir George Ivan Morrison OBE is a Northern Irish singer-songwriter, instrumentalist and record producer. His professional career began as a teenager in the late 1950s, playing a variety of instruments including guitar, harmonica, keyboards and saxophone for various Irish showbands, covering the popular hits of that time. Known as "Van the Man" to his fans, he rose to prominence in the mid-1960s as the lead singer of the Northern Irish R&B and rock band, Them, with whom he recorded the garage band classic "Gloria". His solo career began in 1967, under the pop-hit orientated guidance of Bert Berns with the release of the hit single "Brown Eyed Girl". After Berns's death, Warner Bros. Records bought out his contract and allowed him three sessions to record Astral Weeks . Though this album eventually garnered praise, it was initially a poor seller.


Morrison has a reputation for being at once stubborn,idiosyncratic, and 'sublime.' His live performances have been described as 'transcendental' and 'inspired.' Some of his recordings, such as the studio albums Astral Weeks and Moondance, and the live album It's Too Late to Stop Now, are highly acclaimed. His albums have performed well in Ireland and the UK, with more than 40 hitting the UK top 40. He has scored 18 top 40 albums in the US, 12 of them between 1997 and 2017.


Much of Morrison's music is structured around the conventions of soul music and R&B. An equal part of his catalogue consists of lengthy, spiritually inspired musical journeys that show the influence of Celtic tradition, jazz and stream-of-consciousness narrative, such as the album Astral Weeks. The two strains together are sometimes referred to as "Celtic soul".


He has received two Grammy Awards, the 1994 Brit Award for Outstanding Contribution to Music, the 2017 Americana Music Lifetime Achievement Award for Songwriting and has been inducted into both the Rock and Roll Hall of Fame and the Songwriters Hall of Fame. In 2016, he was knighted for services to the music industry and to tourism in Northern Ireland.


George Ivan Morrison was born on 31 August 1945, at 125 Hyndford Street, Bloomfield, Belfast, Northern Ireland, as the only child of George Morrison, a shipyard electrician, and Violet Stitt Morrison, who had been a singer and tap dancer in her youth. Morrison's family were working class Protestants descended from the Ulster Scots population that settled in Belfast. From 1950 to 1956, Morrison, who began to be known as "Van" during this time, attended Elmgrove Primary School. His father had what was at the time one of the largest record collections in Northern Ireland and the young Morrison grew up listening to artists such as Jelly Roll Morton, Ray Charles, Lead Belly, Sonny Terry and Brownie McGhee and Solomon Burke; of whom he later said, "If it weren't for guys like Ray and Solomon, I wouldn't be where I am today. Those guys were the inspiration that got me going. If it wasn't for that kind of music, I couldn't do what I'm doing now."


This article uses material from the Wikipedia article "Van Morrison", which is released under the Creative Commons Attribution-Share-Alike License 3.0.