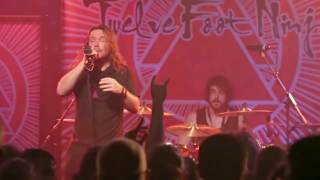 
Twelve Foot Ninja is an Australian heavy metal band from Melbourne, Victoria. They released their debut album Silent Machine in 2012. The band consists of Kin , Russ , Stevic , and Rohan . They won Best New Talent at the 2014 Revolver Golden Gods Awards as well as two listener-voted awards from SiriusXM's Liquid Metal the year before. The band broke a world record for the most amount crowdfunded for a music video. Their first headline tour of Europe in April 2017 sold out five of the seven UK shows.


The band formed in 2008 and released their debut EP New Dawn in 2008, resulted in the band earning a Triple J Unearthed number 1 with the track "Dark Passenger", various support slots, and an appearance at Sydney's Come Together Festival.


Their second EP, Smoke Bomb, was released in November 2010. Produced by the band’s guitarist Steve "Stevic" Mackay in his Melbourne home studio, the EP was mixed by local producer/engineer Hadyn Buxton and mastered by Howie Weinberg at Masterdisk, New York City. Guest musicians on the release include Bär McKinnon on Saxophone and Ollie McGill on Keyboards.


Their debut studio album, Silent Machine, was released in November 2012. The album's first official single "Mother Sky" was released on 24 August and the video was premiered on Triple J's Home & Hosed blog. The second single "Coming for You" was released on 2 November 2012. Each song from the debut album came with a comic, created by Keith Draws , inspired by the lyrics and based on the original fable of Twelve Foot Ninja . The story follows a sole ninja's mission to restore balance in a world headed toward a self-inflicted apocalypse All the individual comics were later combined into a 72-page bound comic book.


In early 2013, Twelve Foot Ninja embarked on their first headline tour of Australia and sold out every capital city. The band successfully completed a crowdfunding campaign on Australian site Pozible in May 2013 for a music video "Ain't That a Bitch" about a fantastic revenge story on an internet troll.


In October–November 2013, Twelve Foot Ninja toured Europe and North America for the first time. Their first show in London at the Camden Barfly sold out 3 weeks in advance and they also played Euroblast in Cologne, selling the most merchandise after the headliners Meshuggah. Their US/Canada tour in 2013 was opening for progressive metal band Periphery. In May 2014 Twelve Foot Ninja returned to North America for their first headline tour. They also played AEG festivals Rock on the Range, Carolina Rebellion, Welcome To Rockville, Rocklahoma. They were also invited to showcase at Michele Clark's revered radio conference in San Diego Sunset Sessions Rock.


This article uses material from the Wikipedia article "Twelve Foot Ninja", which is released under the Creative Commons Attribution-Share-Alike License 3.0.