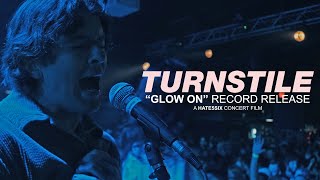 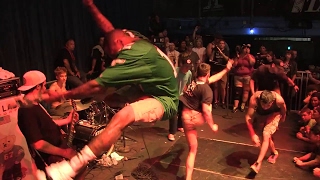 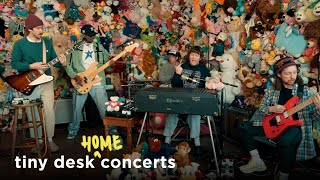 
Turnstile is an American hardcore punk band from Baltimore, Maryland, formed in 2010. They have released five EPs and three studio albums.


Turnstile formed in 2010, based out of Baltimore's emerging hardcore scene. They released their debut EP, titled Pressure to Succeed, in 2011, and their second EP, Step 2 Rhythm, in 2013, both via Reaper Records. On January 13, 2015, Turnstile released their debut full-length album Nonstop Feeling, also via Reaper Records. The album was recorded at Salad Days Studios with producer Brian McTernan. Supporting the release of the album, Turnstile went on both an East Coast and a West Coast tour with Superheaven, titled the Nonstop Feeling Tour. They also supported New Found Glory on their spring 2015 tour. Following this tour their guitarist Sean Coo stepped down, and in 2016 a replacement was found in Pat McCrory of fellow Maryland based hardcore band Angel Du$t.


On September 16, 2016, Turnstile released their third EP titled Move Thru Me. The record charted at number 14 on the Billboard Heatseekers Album Chart and number 19 on the Hard Rock Albums chart. The band began recording for their second album under Roadrunner Records in the fall of 2017, completing recording in early 2018. The record was produced by Will Yip at his Studio 4 recording studio. On February 23, 2018, the band released the album, titled Time & Space; it is their first release under a major label. Three of the tracks from this album were reworked together with DJ and producer Mall Grab and released as an EP, titled Share A View, in January 2020.


On June 27, 2021, the band released their fifth extended play, Turnstile Love Connection, alongside an accompanying short film directed by Yates. On July 15, 2021, the band announced the release of another album, Glow On. The first single from the album, Alien Love Call, was released, featuring British singer Blood Orange.


On August 27, 2021, the band's fourth full-length album, Glow On was released, debuting at #30 on the Billboard 200. The album was met with universal acclaim from critics, and Rolling Stone listed Glow On at #8 on its list of The Best 50 Albums of 2021.

This article uses material from the Wikipedia article "Turnstile", which is released under the Creative Commons Attribution-Share-Alike License 3.0.