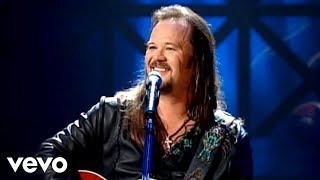 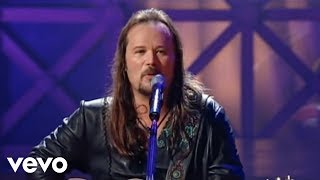 
James Travis Tritt is an American country music singer, songwriter, and actor. He signed to Warner Bros. Records in 1989, releasing seven studio albums and a greatest hits package for the label between then and 1999. In the 2000s, he released three studio albums on Columbia Records and one for the now-defunct Category 5 Records. Seven of his albums are certified platinum or higher by the Recording Industry Association of America ; the highest-certified is 1991's It's All About to Change, which is certified triple-platinum. Tritt has also charted more than 40 times on the Hot Country Songs charts, including five number ones—"Help Me Hold On", "Anymore", "Can I Trust You with My Heart", "Foolish Pride", and "Best of Intentions"—and 15 additional top ten singles. Tritt's musical style is defined by mainstream country and Southern rock influences.


He has received two Grammy Awards, both for Best Country Collaboration with Vocals: in 1992 for "The Whiskey Ain't Workin'", a duet with Marty Stuart, and again in 1998 for "Same Old Train", a collaboration with Stuart and nine other artists. He has received four awards from the Country Music Association and has been a member of the Grand Ole Opry since 1992.


James Travis Tritt was born on February 9, 1963, in Marietta, Georgia, to James and Gwen Tritt. He first took interest in singing after his church's Sunday school choir performed "Everything Is Beautiful". He received his first guitar at age 8 and taught himself how to play it; in the fourth grade, he performed "Annie's Song" and "King of the Road" for his class, and later got invited to play for other classrooms in his school. At age 14, his parents bought him another guitar, and he learned more songs from his uncle, Sam Lockhart. Later on, Tritt joined his church band, which occasionally performed at other churches nearby.


Tritt began writing music while he was attending Sprayberry High School; his first song composition, entitled "Spend a Little Time", was written about a girlfriend whom he had broken up with. He performed the song for his friends, one of whom complimented him on his songwriting skills. He also founded a bluegrass group with some of his friends and won second place in a local tournament for playing "Mammas Don't Let Your Babies Grow Up to Be Cowboys".


During his teenage years, Tritt worked at a furniture store, and later as a supermarket clerk. He lived with his mother after she and his father divorced; they remarried when he was 18. He worked at an air conditioning company while playing in clubs, but gave up the air conditioning job at the suggestion of one of his bandmates. Tritt's father thought that he would not find success as a musician, while his mother thought that he should perform Christian music instead of country.


Through the assistance of Warner Bros. Records executive Danny Davenport, Tritt began recording demos. The two worked together for the next several years, eventually putting together a demo album called Proud of the Country. Davenport sent the demo to Warner Bros. representatives in Los Angeles, who in turn sent the demo to their Nashville division, which signed Tritt in 1987. Davenport also helped Tritt find a talent manager, Ken Kragen. At first, Kragen was not interested in taking an "entry-level act", but decided to sign on as Tritt's manager after Kragen's wife convinced him.


This article uses material from the Wikipedia article "Travis Tritt", which is released under the Creative Commons Attribution-Share-Alike License 3.0.