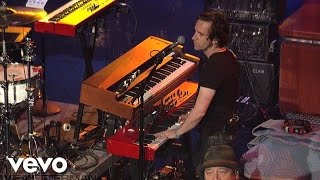 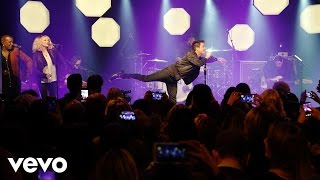 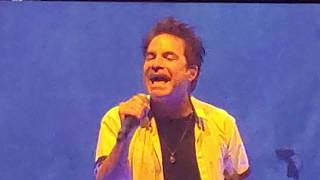 
Train is an American rock band from San Francisco, formed in 1993. As of 2019, the band consists of Pat Monahan , Hector Maldonado , Jerry Becker , Matt Musty , Sakai Smith , and Nikita Houston .


With a lineup that included original members Monahan, Rob Hotchkiss, Jimmy Stafford, Scott Underwood, and Charlie Colin, the band achieved mainstream success with their debut album Train. The album was released in 1998 with the hit "Meet Virginia". Train's 2001 album, Drops of Jupiter, contained the lead single "Drops of Jupiter ". The single won two Grammy Awards in 2002, and the album was certified double platinum. Train's third studio album, My Private Nation, released in 2003, was certified platinum in the United States with the hit "Calling All Angels". Following the departures of Hotchkiss and Colin, the band released their fourth album, For Me, It's You in 2006, with Brandon Bush and Johnny Colt . Despite a generally positive reception from critics, the album was commercially unsuccessful. Because of this, Train went on a two-year hiatus from recording any new music.


In late 2009, Train released the album Save Me, San Francisco, from which the album's three singles—the RIAA 6× platinum-certified international hit "Hey, Soul Sister", "If It's Love" and "Marry Me"—reached numbers three, 34, and 34, respectively, on the Billboard Hot 100. The album was certified gold by both the RIAA and ARIA. In April 2012, Train released California 37. The first single from the album, entitled "Drive By", reached number 10 on the Billboard Hot 100 and was a Top 10 hit in the UK. This album was followed by Bulletproof Picasso , Christmas in Tahoe , Train Does Led Zeppelin II , and A Girl, a Bottle, a Boat .


Train has sold over 10 million albums and 30 million tracks worldwide.


Following the dissolution of his Led Zeppelin cover band "Rogues Gallery", singer Pat Monahan left his hometown of Erie, Pennsylvania in late 1993. He resettled in California and crossed paths with Berklee College of Music alumnus Rob Hotchkiss, who performed in coffee houses and local clubs. The two shared lead vocals, with Hotchkiss on guitar and harmonica, and Monahan playing percussion, including a modified conga attached to a kick-drum pedal. Hotchkiss had been the lead singer for L.A.-based Apostles. After deciding to form a full band, the duo recruited Jimmy Stafford on guitar, Charlie Colin on bass, and Scott Underwood on drums, thus solidifying Train's lineup in 1994. Train attempted to get signed under Columbia Records in 1996, but were rejected. Subsequently, the band decided to release their first self-titled CD independently. By 1997, they were touring nationally, opening concerts for bands such as Barenaked Ladies, Hootie & the Blowfish, Cracker and Counting Crows.


Train is the band's eponymous debut album. Initially released on Aware/RED, a joint venture with Columbia, A&R executive Tim Devine picked up the record for release on Columbia. The album was released on February 24, 1998, with a different track listing from its independent counterpart. It was self-produced for $25,000, and three singles from the album were released. The first single released, "Free", was a large hit on pop/mainstream rock stations. The second single, "Meet Virginia" was a top 20 hit on the Billboard Hot 100, peaking at number 20, and the third single was "I Am". The album brought the band national fame, and was certified platinum by the RIAA. Following the success of the debut album, the band began working on their second album.


This article uses material from the Wikipedia article "Train", which is released under the Creative Commons Attribution-Share-Alike License 3.0.