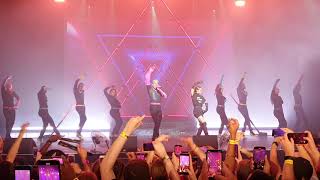 Todrick Hall is an American singer, songwriter, choreographer, and YouTuber. He gained national attention on the ninth season of the televised singing competition American Idol, where he made it to the semi-finals. Following this, he amassed a following on YouTube with viral videos including original songs, parodies, and skits. He aspires to be a role model for LGBTQ and people of color, and includes his experiences as a Black gay man in his art. A documentary series about his video-making process titled Todrick aired on MTV in 2015.


Starting with season eight, Hall became a resident choreographer and occasional judge on RuPaul's Drag Race. From 2016 to 2017, Hall starred as Lola in Kinky Boots on Broadway. Later in 2017, he began appearances as Billy Flynn in Chicago on Broadway and the West End.


As a singer-songwriter he has released four studio albums, including the visual albums Straight Outta Oz and Forbidden . In 2020 he released an EP, Quarantine Queen, in response to the COVID-19 pandemic featuring "Mask, Gloves, Soap, Scrub", and was the international host of Global Pride 2020.


Todrick Hall was born on a farm on April 4, 1985 in Plainview, Texas, a farming community in the state's panhandle. He was raised by a single mother until she married when he was a teen, gaining a brother and stepfather. The schools and community supported a system of sports, especially football, and the related cheerleading; the arts were not a priority. Later the family would move to Dallas. Raised as a single child until his teens, he accepts his people skills were lacking. He did have the family's twelve nephews and their grandsons around but never fit in with their activities.


His favorite story since he was six is The Wizard of Oz, later he would create Oz, the Musical, based on the book, an entire homage to the film, The Wizard of Ahhhs featuring the pop a cappella quintet Pentatonix, and his visual album and tour Straight Out of Oz. An elementary teacher of his in the city led Hall toward the arts; theater, the symphony orchestra, ballet and music, he said. "She opened my eyes to this whole realm of the fine arts that I didn’t know existed."


He realized he was gay in high school, and came out to his family when he was fifteen; it took them a few years to accept. At sixteen he started as a performer on weekends at the amusement park Six Flags Over Texas; it was the first time he combined singing and dancing. He also performed on cruises with Royal Caribbean, Holland America Line, and at Walt Disney Parks and Resorts. Hall feels his tenacious work ethic comes from the lack of opportunities he had in the entertainment industry as a Black gay man.


When Hall was twenty he auditioned for the Broadway production of The Color Purple with Oprah Winfrey, and Fantasia Barrino. He worked in The Color Purple, in the ensemble, and as understudy for the role of Harpo. His working with Barrino would inspire him to later audition for the reality singing competition American Idol, he saw how it transformed her life. After The Color Purple he would do Memphis: The Musical, and touring productions of Beauty and the Beast, Radio City Christmas Spectacular featuring the Rockettes, and Hairspray.


This article uses material from the Wikipedia article "Todrick Hall", which is released under the Creative Commons Attribution-Share-Alike License 3.0.