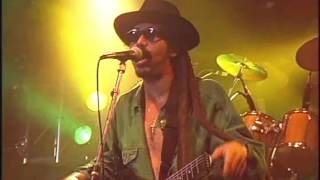 
Third World is a Jamaican reggae fusion band formed in 1973. Their sound is influenced by soul, funk and disco. Although it has undergone several line-up changes, Stephen "Cat" Coore and Richard Daley have been constant members.


After recording some tracks with Geoffrey Chung which were not released, the band's first single was the self-produced "Railroad Track" . In their early days they played primarily in Kingston's hotels and nightclubs and supported The Jackson Five when they played at the Jamaican National Stadium.


They were soon signed by Island Records and toured Europe with The Wailers. The band's self-titled debut album was released in 1976. The album included a cover of "Satta Massagana", originally performed by The Abyssinians, which became a local hit. Hamilton and Cornell Marshall were replaced by two more former Inner Circle members, singer William "Bunny Rugs" Clarke and drummer Willie Stewart, before the recording of their second album, 96° in the Shade , which included several local hits. Notable among its eight tracks were "1865 ", a reference to the 1865 Morant Bay rebellion, "Rhythm of Life" and the album's only cover, "Dreamland", written by Bunny Wailer. They played in front of 80,000 people at the Smile Jamaica festival in 1976.


In 1977 the band collaborated with psychiatrist Frederick Hickling on the Explanitations show that was performed at Kingston's Little Theatre early the following year.


Third World's greatest success came in the late 1970s and early 1980s, peaking with their cover version of The O'Jays' "Now That We Found Love" from their third album Journey to Addis. After its initial recording, the single was remixed at the behest of Island Records Special Projects division head, Alex Masucci, with new vocals and an uptempo beat. "Now That We Found Love" became a hit single on both sides of the Atlantic in 1978, reaching the top 10 in the UK.Journey to Addis became a top thirty hit album in the UK. They had first met Stevie Wonder in Jamaica in 1976, and the single prompted him to perform with them at the Reggae Sunsplash festival in 1981 in the wake of Bob Marley's death, playing his tribute to Marley, "Master Blaster". Third World went on to perform several times at the festival, and they also took part in the "Reggae Sunsplash USA" tour in 1985. Wonder also wrote, along with Melody A McCully, their 1982 hit "Try Jah Love", which brought them further exposure in North America. They were also guests during the third season of SCTV.


This article uses material from the Wikipedia article "Third World", which is released under the Creative Commons Attribution-Share-Alike License 3.0.