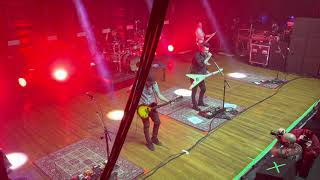 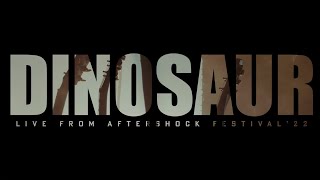 Theory of a Deadman - Dinosaur (Live At Aftershock)
Share Concert

About Theory of a Deadman


Theory of a Deadman is a Canadian rock band from North Delta, British Columbia. Formed in 1999, the band is currently signed to Roadrunner Records as well as 604 Records. The band includes traits of music styles, such as country and acoustic, in addition to their post-grunge and alternative rock foundation. Nine of their singles have entered the top ten of the US Billboard Mainstream Rock chart, including four songs that peaked at number one: "Bad Girlfriend", "Lowlife", "Rx " and "History of Violence".


Theory of a Deadman was initially formed in 1999 by lead guitarist/vocalist Tyler Connolly and bassist Dean Back. They later became the first act to sign with Nickelback frontman Chad Kroeger's 604 Records imprint in 2001 after Connolly convinced Kroeger's ex-girlfriend Jodi to send him a copy of their first demo recording. Shortly afterwards; Kroeger invited Connolly to a barbecue and discussed giving his band a record deal soon after. They released their eponymous debut album Theory of a Deadman on September 17, 2002. The name of the band comes from a song from their first album, whose lyrics describe a man preparing to commit suicide. That track was later renamed "The Last Song". The album was a large success for the band in North America, peaking at #4 in Canada and #85 in the US. The band would later tour in support of the album as an opening act for Nickelback throughout 2002 and 2003. The album was certified platinum in the United States and Canada on May 12, 2006.


On March 29, 2005, Theory of a Deadman released their second album, Gasoline. After the release of the album, the band toured with Shinedown and No Address. Starting on March 1, 2005, Theory began a promotional tour, headlined by Breaking Benjamin and The Exies. Songs from Gasoline appeared in the soundtrack of the 2005 video game Fahrenheit, which was released under the title Indigo Prophecy in the United States.


On April 1, 2008, Theory of a Deadman released their third album, Scars & Souvenirs, from which they released eight singles: "So Happy", "By the Way", "Little Smirk", "Bad Girlfriend", "All or Nothing", "Hate My Life", "Not Meant to Be", and "Wait for Me". The song "By the Way" features vocals from Chris Daughtry and Robin Diaz. On April 6, 2008, they appeared at the Juno Awards in Calgary, Alberta, after making various stops across Canada in a promotion known as Journey to the Junos.


Theory also performed in the 96th Grey Cup halftime show, along with Suzie McNeil and Andree Watters, on November 23, 2008. Along with Hinder, they supported Mötley Crüe during the 2008/2009 tour. They also played at Crüe Fest 2.


This article uses material from the Wikipedia article "Theory of a Deadman", which is released under the Creative Commons Attribution-Share-Alike License 3.0.

Theory of a Deadman Tour