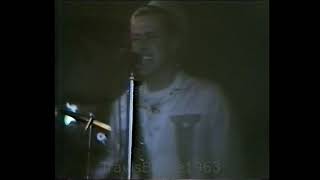 About Theatre of Hate


Theatre of Hate are a British post-punk band formed in London, England, in 1980.


The Pack were a British punk rock band formed in 1978, comprising Kirk Brandon on vocals and guitar, Simon Werner on guitar, Jonathan Werner on bass, and Rab Fae Beith on drums. Beith was eventually replaced by Jim Walker. The band released two singles in 1979, ""Heathen" and "King of Kings", and the Kirk Brandon & The Pack of Lies EP in 1980, before splitting. Their posthumous releases were the Long Live the Past EP , The Pack 1982 live album, recorded in 1979 and released on cassette only on Walker's Donut Records label, and the collection Dead Ronin .


In 1980, The Pack disbanded. Joined by Luke Rendle , Steve Guthrie , and John Lennard , bassist Stan Stammers completed Brandon's line-up to form Theatre of Hate; the Werner brothers subsequently joined The Straps, the street punk band Stammers had played for prior. Inspired by Antonin Artaud's book Theatre and its Double, the new band took its name from the concept of the Theatre of Cruelty: "Artaud called for the emotional involvement of the audience. Singer Brandon borrowed the thespian term because he was trying to do the same."


"Original Sin", Theatre of Hate's first single, was released in November 1980 as a double A-side with "Legion"; reaching No. 5 in the UK Indie Chart, it was followed by the singles "Rebel Without a Brain" in April 1981, and "Nero" in July. Early attention focused on the band as a live act, its full-length debut in 1981 being the album He Who Dares Wins , released on vinyl by Burning Rome Records. Guthrie left the band shortly after the album's release. Another live recording followed, Live at the Lyceum, issued on cassette, also in 1981.


In August 1981, Mick Jones of The Clash produced Westworld, Theatre of Hate's first studio album to be released prior to the band's dissolution the following year. Guitarist Billy Duffy joined the band soon after the album had been recorded, and drummer Rendle was replaced by Nigel Preston. Heralded by the Top 40 single "Do You Believe in the West World" , Westworld was released in February 1982 by Burning Rome Records, peaking at No. 17 the following month during its seven week run in the UK Albums Chart. Recorded in September 1981 in Berlin, the live album He Who Dares Wins was also released in February in an attempt to curtail the sale of bootlegged recordings of Theatre of Hate concerts.


This article uses material from the Wikipedia article "Theatre of Hate", which is released under the Creative Commons Attribution-Share-Alike License 3.0.