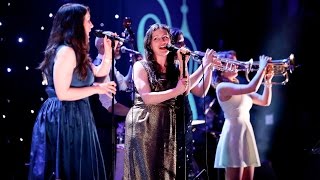 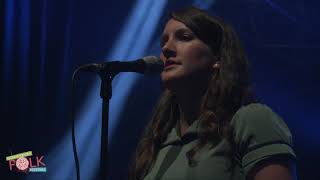 The Unthanks at Shrewsbury Folk Festival 2017 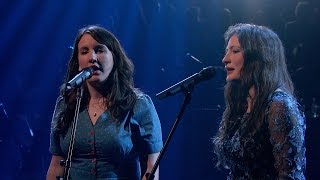 
The Unthanks are an English folk group known for their eclectic approach in combining traditional English folk, particularly Northumbrian folk music, with other musical genres. Their debut album, Cruel Sister, was Mojo magazine's Folk Album of the Year in 2005. Of their subsequent albums, nine have received four or five-starred reviews in the British national press. Their album Mount the Air, released in 2015, won in the best album category in the 2016 BBC Radio 2 Folk Awards. In 2017 they released two albums featuring the songs and poems of Molly Drake, mother of singer-songwriter and musician Nick Drake.


Lines , a trilogy of albums about the Hull triple trawler tragedy , the First World War and the poems of Emily Brontë, the principal link between them being their focusing on female perspectives across time, was released in February 2019. Their most recent album, Live and Unaccompanied, was released in March 2020.


Originally an all-female band, Rachel Unthank and the Winterset made their debut performance at Towersey Village Festival in August 2004 and, on 11 May 2005, launched their debut album Cruel Sister at Holmfirth Folk Festival. Cruel Sister received support from a number of DJs on BBC Radio 2 and was subsequently awarded Folk Album of the Year by Mojo magazine.


Their follow-up album, The Bairns, released on 20 August 2007, was nominated for the Best Album award at the BBC Radio 2 Folk Awards 2008 and was runner-up for the 2008 Mercury Prize. The album debuted in the UK Top 200 Albums Chart at number 178 in the week after the Mercury Prize award ceremony. Reviewing The Bairns for BBC Music, Mel Ledgard described it as "an album with a cinematic quality, huge in dramatic atmosphere". In a four-starred review, Robin Denselow of The Guardian nominated it as "one of the folk records of the year".


The band were nominated for three further BBC Radio 2 Folk Awards in 2008 , and were successful in one category, receiving the Horizon Award at the ceremony in The Brewery, London.


In 2009, the band became the Unthanks, and their manager Adrian McNally and his childhood friend Chris Price joined the group. Here's the Tender Coming, their third album , was released on 14 September 2009. It was Folk Album of the Year for The Guardian and also for Mojo magazine.Sid Smith, of BBC Music, described it as an "astonishing record", "beautiful", "haunting", and "beguiling". In a four-starred review for The Guardian, Colin Irwin said: "This album may not be quite as bleak as The Bairns, and the sound is more sophisticated, but they still sound like nobody else... Tracks build slowly and mysteriously, but all are in service of the song. Their arrangement of the title track − a traditional song about the emotional devastation wrought by press gangs − brilliantly encapsulates the story's fraught desperation. Their version of Nobody Knew She Was There, one of Ewan MacColl's lesser-known songs about his mother, painstakingly paints a similarly dramatic backdrop with more atmospheric brass, and they put their own stamp on the Nic Jones classic, Annachie Gordon."


This article uses material from the Wikipedia article "The Unthanks", which is released under the Creative Commons Attribution-Share-Alike License 3.0.