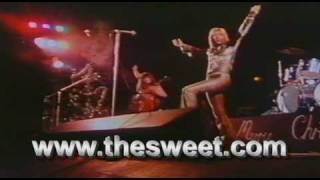 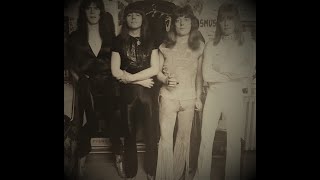 
The band was formed in London in 1968 and achieved their first hit, "Funny Funny", in 1971 after teaming up with songwriters Nicky Chinn and Mike Chapman and record producer Phil Wainman. During 1971 and 1972, their musical style followed a marked progression from the Archies-like bubblegum style of "Funny Funny" to a Who-influenced hard rock style supplemented by a striking use of high-pitched backing vocals.


The band first achieved success in the UK charts, with thirteen Top 20 hits during the 1970s alone, with "Block Buster!" topping the chart, followed by three consecutive number two hits in "Hell Raiser" , "The Ballroom Blitz" and "Teenage Rampage" . The band turned to a more hard rock style with their mid-career singles, like 1974's "Turn It Down". "Fox on the Run" also reached number two on the UK charts. These results were topped in West Germany and other countries on the European mainland. They also achieved success and popularity in the US with the top ten hits "Little Willy", "The Ballroom Blitz", "Fox on the Run", and "Love is Like Oxygen".


The Sweet had their last international success in 1978 with "Love Is Like Oxygen". Connolly left the group in 1979 to start a solo career and the remaining members continued as a trio until disbanding in 1981. From the mid-1980s, Scott, Connolly and Priest each played with their own versions of Sweet at different times. Connolly died in 1997, Tucker in 2002 and Priest in 2020. Andy Scott is still active with his version of the band. Sweet have since sold over 35 million albums worldwide.


Sweet's origins can be traced back to British soul band Wainwright's Gentlemen. Mark Lay's history of that band states they formed around 1962 and were initially known as Unit 4. Founding members included Chris Wright , Jan Frewer , with Jim Searle and Alfred Fripp on guitars. Phil Kenton joined on drums as the band changed its name to Wainwright's Gentlemen . Managed by Frewer's father, the band performed in the Hayes, Harrow and Wembley area. By 1964 the group was also playing in London, including at the Saint Germain Club on Poland Street.


In January 1964 the band came fifth in a national beat group contest, with finals held at the Lyceum Strand on 4 May 1964. Highlights of the show were presented on BBC1 by Alan Freeman. Chris Wright left the line-up in late 1964 and was replaced by Ian Gillan. A female vocalist named Ann Cully soon joined the band. Mick Tucker, from Ruislip, joined on drums replacing Phil Kenton. The band recorded a number of tracks including a cover of the Coasters-Hollies hit "Ain't That Just Like Me", which was probably recorded at Jackson Sound Studios in Rickmansworth. The track includes Gillan on vocals, Tucker on drums and, according to band bassist Jan Frewer, is thought to have been recorded in 1965. Gillan quit in May 1965 to join Episode Six, and later, Deep Purple. Cully remained as vocalist before departing some time later. Gillan's and Cully's eventual replacement, in late 1966, was Scots-born vocalist Brian Connolly, who hailed more recently from Harefield. Tony Hall had joined on saxophone and vocals and when Fripp left he was replaced by Gordon Fairminer. Fairminer's position was eventually assumed by Frank Torpey - a schoolfriend of Tucker's who had just left West London group The Tribe . Torpey only lasted a few months, and in late 1967 Robin Box took his place. Searle, regarded by many as the most talented musically, disappeared from the scene. Tucker and Connolly remained with Wainwright's Gentlemen until January 1968. Tucker was replaced by Roger Hills. When the Gentlemen eventually broke up, Hills and Box joined White Plains who eventually scored a big hit with "My Baby Loves Lovin'".


This article uses material from the Wikipedia article "The Sweet", which is released under the Creative Commons Attribution-Share-Alike License 3.0.