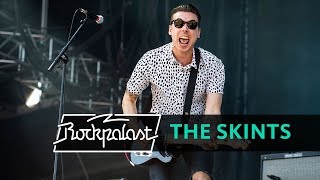 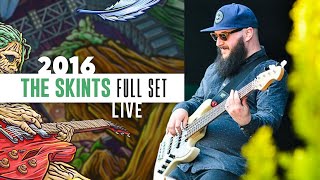 
The Skints are a band from London, described by Clash Music as “the torchbearers for modern British reggae music.” The Skints mix reggae, ska, dub, punk rock, dancehall, soul, and hip hop, touring extensively across the UK, Europe and the United States. Their album FM debuted at number 7 on the UK independent chart.


The Skints formed as school friends at Woodbridge High School . The band hail from the Leyton/Walthamstow and South Woodford/Woodford areas of northeast London. They settled on the current line-up in May 2007. The Skints relentlessly gigged all over London's punk rock and squat party circuit before venturing out of the M25 to play their first self-booked DIY tour, alongside fellow east Londoners ClayPigeon. The band's early work received some late night/specialist rotation at BBC Radio 1, most noticeably from The Punk Show with Mike Davies. In the summer of 2008, after they toured with ClayPigeon, the band had released their debut 6-track ska-punk/reggae E.P. on Do The Dog Records. Two months later The Skints were offered their first ever major tour, as main support to The King Blues on their second album tour. The tour was extremely successful and allowed them to start making a name for themselves in the UK underground punk scene.


Over the next year the band toured with the likes of The Slackers, Sonic Boom Six, The Aggrolites and Random Hand to name a few. They made good friends in particular with Sonic Boom Six and Random Hand with whom they have toured several times. The band played a few festivals in 2009, first being Slam Dunk Festival in Leeds. In July they travelled to the Czech Republic to play Mighty Sounds Festival, their first trip to mainland Europe. By the time August came round the band played a packed out slot at Rebellion festival in Blackpool in front of hundreds of people. Marcia has guested live and in session on various instruments with bands including The King Blues, Goldfinger, Random Hand, Reel Big Fish, Suicide Bid, Sonic Boom Six and Dub producer and engineer Mad Professor.


Recorded by Peter Miles, the debut album Live.Breathe.Build.Believe was released on 9 November 2009 and contains 10 tracks mixing reggae, ska and dub with a thrash of hardcore punk rock. The band's first headline UK tour started with a sold out show at Camden Barfly and ended at the annual City Invasion festival. To celebrate and promote their release on Rebel Alliance, the band took part in the first ever Rebel Alliance Tour in January and February 2010 with Random Hand, Chris Murray and Mouthwash who also all had releases on the record label. In January 2010 the band were featured on the BBC Radio 1 Punk Show with Mike Davies.


The Skints left Rebel Alliance Recordings in May 2010 and re-released the album through their publisher, Bomber Music Ltd, in June 2010. That Spring they toured Germany for the first time with The Slackers and played extensively across the UK that summer, culminating in their first appearance on The Lock Up Stage at Reading and Leeds Festivals. A seven-inch picture disc vinyl single, "Up Against The Wall" was released on Seven Inch Records in October 2010, featuring a dub version by prolific dub producer Mad Professor, "Where the Raggaman Go ." Shortly afterwards the band embarked on a 6 week tour of the UK consisting of headline shows and two separate support runs with Bedouin Soundclash and Sublime with Rome, respectively.


February 2011, The Skints supported Reel Big Fish on a 28-date tour of the UK and Europe.


This article uses material from the Wikipedia article "The Skints", which is released under the Creative Commons Attribution-Share-Alike License 3.0.