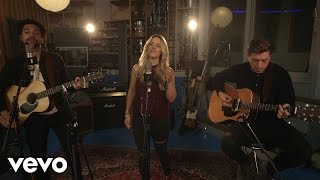 The Shires - A Thousand Hallelujahs (Live at The Pool) 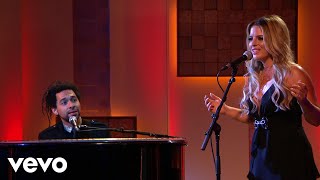 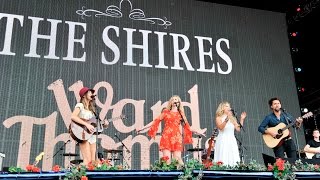 
The Shires are a British country duo composed of singer-songwriters Ben Earle and Crissie Rhodes. Earle sings harmony vocals, plays piano and guitar, and Rhodes is lead singer. The duo formed in 2013 and released their debut album Brave in 2015, becoming the first UK country act to chart in the Top 10 of the UK Albums Chart. The group's second album, My Universe, became the fastest-selling UK country album in history when it was released in October 2016.


They hail from the neighbouring counties of Hertfordshire and Bedfordshire in England. "Shire" is the original term for what is usually known as a county in the United Kingdom. The duo fittingly took the band name to maintain a British identity and take a small part of Britain to the United States. After playing hardly half a dozen shows together, The Shires caught the attention of Decca Records, who signed them in the United Kingdom, and they secured a contract with American record label Universal Music Group Nashville, thus becoming the first ever English country act to be signed to a major Nashville label. They were also the first UK country act to have a top ten album and the first to receive an award from the American Country Music Association.


Earle and Rhodes were awarded Honorary Doctorates of the Arts by the University of Bedfordshire for their services and contributions to music on 25 July 2019.


Crissie Rhodes has performed at weddings, pubs and clubs performing songs by Dolly Parton amongst others. After joining The X Factor in 2013, she was tipped as a winner but failed to qualify out of the early rounds. Her country music influences include Alison Krauss, Martina McBride and Faith Hill. Ben Earle was previously a solo artist and had supported KT Tunstall on tour. Also a failed The X Factor contestant, and a struggling songwriter who had been writing for 10 years, he had tried to get cuts for other artists. He discovered country music in 2012 via Lady Antebellum, the American Grammy Award-winning group. He cites the Kacey Musgraves album Same Trailer Different Park as a major career inspiration. Earle and Rhodes met after Ben, with an aim to become part of a duo, posted a "There must be a country singer somewhere" message on the social media website Facebook, seeking a partner, to which Rhodes responded.


As part of BBC Radio 2's coverage of a festival, the Shires were included as a segment in a documentary titled "Nashville UK", which assessed country music's standing in the UK and, as one of its promising artists, their determination to export their British country roots to their American counterparts. The Shires have composed songs with hit Nashville songwriter Steve Mcewan and Play Productions an accomplished Swedish writing and production company, who comprise Tim Larsson, Johan Fransson and Tobias Lundgren, who have worked with Rascal Flatts and Celine Dion.


They were invited to the C2C: Country to Country 2014 Festival and performed at The Town Square Pop Stage on 16 March 2014 outside the London O2 arena. Their first single "Nashville Grey Skies" was released on 4 April 2014 and received its first airplay on the Bob Harris BBC Radio 2 Country show on 3 April 2014. It was added to the BBC Radio 2 "B" Playlist for the week commencing 3 May 2014 and climbed to the "A" playlist the following week. The song was written by Ben before visiting Music City which is a song about hope with a pipe dream of building, and the UK having, a country music capital of its very own. It takes the musicality influences from America whilst maintaining a Britishness with the song writing. It contains facetious lines such as "Well they say it's way too cold for cut-off jeans and they won't be drinking moonshine but G & T's" and "We can build our own Nashville under these grey skies".


This article uses material from the Wikipedia article "The Shires", which is released under the Creative Commons Attribution-Share-Alike License 3.0.