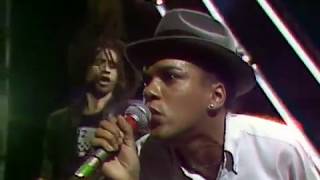 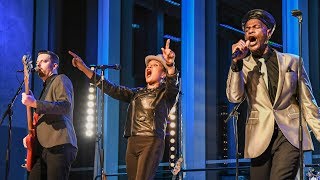 The Selecter - On My Radio/Too Much Pressure (The Quay Sessions) 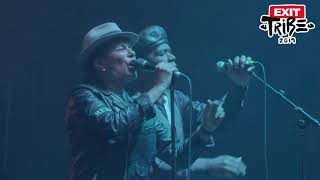 
The Selecter are a 2 Tone ska revival band from Coventry, England, formed in mid-1979.


The Selecter featured a diverse line-up, both in terms of race and gender, initially consisting of Arthur 'Gaps' Hendrickson and Pauline Black on lead vocals, Neol Davies and Compton Amanor on guitar, Desmond Brown on Hammond organ, Charley 'H' Bembridge on drums, and Charley Anderson on bass. The band's name is based on the term "selector", which is a Jamaican word for disc jockey. The band were one of the most successful ska bands of the 2 Tone era, notching up several top forty singles in the British charts. Having co-released the first 2 Tone Ska single with The Specials, they are considered one of the founding acts of the movement. Though highly influential, the original lineup only remained together for a year, and even with replacement players the band only continued until breaking up in 1981.


The Selecter reformed in 1991 and vocalist Black continued to perform and release music under The Selecter name until 2006. By 2011, another version of the band featuring Neol Davies was touring separately. In June 2011 Black applied for, and won, The Selecter trademark and the right to use the name herself. The reformed, Pauline Black-led lineup still tours and releases albums under The Selecter name, most recently releasing Daylight, the band's 15th studio album, in 2017.


In 1977, Neol Davies and John Bradbury , with the trombone player Barry Jones, recorded a track in a recording session in 1977–78 that resulted in "Kingston Affair". The band then became "The Selecter". Their debut single, also called "The Selecter", was the b-side of the Special AKA's hit single "Gangsters", the first 2 Tone Records single. It was released in March 1979, reaching 6 in the UK Charts. The track was written by Davies and Bradbury. Guitarist Davies added long time friends Desmond Brown, who played Hammond organ, and Charley Anderson on bass guitar. With Compton Amanor on guitar, the vocals of Arthur 'Gaps' Hendrickson and Charley 'H' Bembridge on drums the seven piece line-up for the original band was completed when Pauline Black was spotted by Davies. Davies offered Pauline an audition with The Selecter – she joined along with other members in July 1979.


The new band released the singles "On My Radio", "Three Minute Hero" and "Missing Words", written by Davies. The Selecter's debut album,Too Much Pressure, was recorded at the end of 1979 and beginning of the new year, and was released in February 1980 by 2 Tone Records and Chrysalis Records. Anderson and Brown left The Selecter in 1980 to form The People. Their replacements were James Mackie and Adam Williams. Their second album, Celebrate the Bullet was issued in February 1981 and the title track has a music video that aired on MTV's first day of broadcast, before Black left the band to pursue a solo career. A short time after, unsuccessfully having tried Stan Campbell as the singer, the rest of the members disbanded. The Selecter were featured in the 2 Tone film documentary and on the live compilation album Dance Craze.


After the band split in 1982, Black pursued a career in theatre, TV and Film. From 1991 she led a reformed Selecter for 15 years releasing several new albums. In 2006 she took a sabbatical from The Selecter, to write her memoirs Black By Design for publishing house Serpent's Tail. In 2009, she returned to the live arena, playing shows in the UK, Germany and South America guesting with various ska musicians and performing songs from The Selecter's first two albums. During her sabbatical, Black recorded a new 13-track solo album, Pigment of My Imagination, to be released in spring 2011. She later reformed The Selecter, this time with guest original lead singer Arthur "Gaps" Hendrickson, and in summer 2010 they played two shows at the Sinner's Day Festival at The Ethias Arena in Hasselt, Belgium, and at the Bloomsbury Ballroom in London.


This article uses material from the Wikipedia article "The Selecter", which is released under the Creative Commons Attribution-Share-Alike License 3.0.