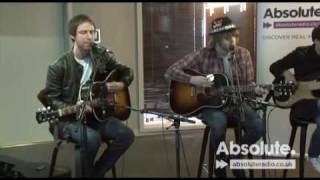 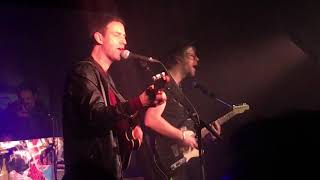 
The Rifles are an English indie rock band from Chingford, London.


Their debut album No Love Lost was released on 17 July 2006 and reached No. 68 in the UK charts. The band currently consists of Joel Stoker , Lucas Crowther , Rob Pyne , Grant Marsh and Dean Mumford . Their follow-up album, Great Escape, was released on 26 January 2009 and came in at No. 27 in the UK charts. Their third album Freedom Run was released on 19 September 2011 reaching No. 37 in the UK. Fourth album None The Wiser was their highest charting release when it reached No. 21 in 2014. The band released their fifth studio album Big Life on 19 August 2016.


Joel Stoker and Lucas Crowther met at Redbridge College in 2003 . They were both inspired by an Oasis concert the two attended in Knebworth, England. Guitarist Crowther revealed "From that moment on we knew we had to start a band." After adding bassist Rob Pyne, who Joel knew from school, and drummer Grant Marsh, who Luke met in the Candy Box club, the Rifles performed their first gig at The Bull & Gate pub in Kentish Town, London in 2004.


The Rifles' first official release was a 7" demo of "Peace & Quiet" released by Blow Up Records. The band switched to fellow independent label Xtra Mile Recordings for their May 2005 release of the single "When I'm Alone", which would go on to reach number 64 in the UK charts. Later that year the band's next single "Local Boy" would be released via Right Hook Recordings. It would get airplay on the Saturday morning show Soccer AM and would help give the band more exposure and even help them become regular guests on the show. The Rifles released two singles, "Repeated Offender" and "She's Got Standards", ahead of the 17 July release of their debut album No Love Lost, which peaked at 26 in the UK charts. The band toured in 2006, and performed at A Campingflight to Lowlands Paradise 2007 and Paaspop Schijndel 2007, two music festivals in the Netherlands. The Rifles launched their European tour to promote their new album including a gig at the Forum, London, at which Paul Weller appeared on stage to play the song "She's the Only One" with the band, and The Jam's single, "The Eton Rifles". The Rifles then released a free download of the song "No Love Lost" a year after their album of the same name was released.


Touring on the back of their album No Love Lost, The Rifles again released a free download, this time of their single "Talking" on 20 October 2007. The single garnered high accolades from BBC Radio 1's Zane Lowe, who called it the "Hottest Record in the World". "Talking" also marks the band's label switch from Red Ink to 679 Recordings. On 21 July 2008, the single "I Could Never Lie" was released on a limited-edition vinyl disc. The Rifles also made appearances at the Underage Festival and the V Festival in the summer and played an extensive tour throughout October and November in 2008 when long-time friend of the band Dean Mumford was added on keyboards as session player for live performances.


When the band's second album was delayed from October 2008 to January 2009, the Rifles created The Rifles EP that fans could download on the internet. The Rifles released their second album Great Escape on 26 January 2009, which peaked at 27 in the UK charts and reached the number 2 slot in the UK indie charts. In April 2009 thy performed live at the PFA Awards performing a re-written version of Billy Joel's "We Didn't Start the Fire" which was broadcast by Sky Sports. After a tour throughout the UK and Germany, the band announced extensive acoustic tours for the fall and winter of 2010 and plans for a third album.


This article uses material from the Wikipedia article "The Rifles", which is released under the Creative Commons Attribution-Share-Alike License 3.0.