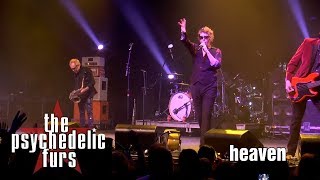 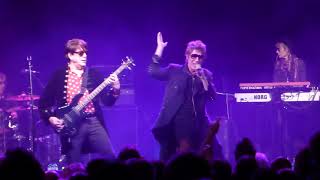 About The Psychedelic Furs


The Psychedelic Furs are a British new wave band founded in London in February 1977. Led by singer Richard Butler and his brother Tim Butler on bass guitar, the Psychedelic Furs are one of the many acts spawned from the British post-punk scene. Their music went through several phases, from an initially austere art rock sound, to later touching on new wave and hard rock.


The band had several hits in their early career. In 1986, filmmaker John Hughes used their song "Pretty in Pink" for his film of the same name. They went on hiatus after they finished touring in 1992, but resumed in 2000 and continue to perform live. The band released Made of Rain, their first studio album in nearly three decades, on 31 July 2020.


Richard Butler stated that the Psychedelic Furs began rehearsing in his family's front room, but were soon banished because of the noise. The band was initially called RKO, then Radio. They later vacillated between calling themselves the Europeans and the Psychedelic Furs, playing gigs under both names before permanently settling on the latter. The word psychedelic was chosen to separate the band from punk rockers who ostentatiously scorned the legacy of 1960s rock music.


The band initially consisted of Richard Butler , Tim Butler , Duncan Kilburn , Paul Wilson and Roger Morris . By 1979, this line-up had expanded to a sextet with Vince Ely replacing Wilson on drums and John Ashton joining as a second guitarist. The Psychedelic Furs' debut, a self-titled album released in March 1980, was produced by Steve Lillywhite. The album quickly established the band on radio in Europe and was a No. 18 hit in the UK Albums Chart. The album also found success in Germany, Italy, France, Spain and Australia.


The Furs found success in the US with their next release, 1981's Talk Talk Talk which saw the band making its debut on the US Billboard 200 chart. In the UK, the album yielded two charting singles, "Dumb Waiters" and the original version of "Pretty in Pink". The latter song served as inspiration for the 1986 John Hughes film of the same name and was re-recorded for the platinum-selling soundtrack - though Richard Butler was later adamant that the cinematic interpretation had very little to do with the song's original intent.


In 1982, the band was reduced to a quartet with the departures of Morris and Kilburn, and moved to the U.S. in search of a producer. The band recorded their next album, Forever Now, with record producer Todd Rundgren in Woodstock, New York. Released in September 1982, this album contained "Love My Way", which became another UK chart entry, and also their first US Billboard Hot 100 single.


This article uses material from the Wikipedia article "The Psychedelic Furs", which is released under the Creative Commons Attribution-Share-Alike License 3.0.