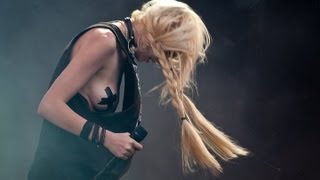 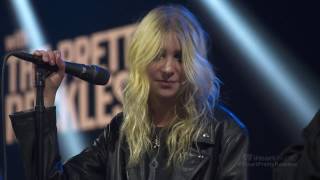 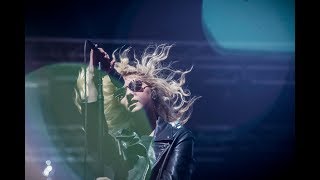 About The Pretty Reckless


For two years singer, rhythm guitarist and Gossip Girl actress Taylor Momsen worked with several producers before meeting Kato Khandwala. Momsen has said that she liked Khandwala because he was a rock producer as opposed to a pop producer. Khandwala introduced Momsen to Ben Phillips and the three of them began to write songs together. Three unnamed musicians were hired to form the band with Momsen. The band were originally called The Reckless, but had to change the name due to trademark problems. The band played its first concert on May 5, 2009 at The Annex in New York. After seven concerts the lineup of the band was changed. The new lineup of the band consisted of Momsen with John Secolo , Matt Chiarelli and Nick Carbone . The second line-up of the band also played its first concert at The Annex on June 3, 2009. They recorded some demos in early 2009 and they opened for The Veronicas on their North American tour. In 2010, Secolo, Chiarelli and Carbone left the band.


At present, Momsen is the lead vocalist and rhythm guitarist, with Ben Phillips on lead guitar, Jamie Perkins on drums, and Mark Damon on bass, all of whom played in the band Famous in the early 2000s.


Momsen stated in an interview with OK! magazine that the band signed with Interscope Records and would be releasing their debut album in 2010. In an interview with QTV, Momsen reported the influences on the band to include The Beatles and Oasis, along with grunge band Nirvana. She also stated that her personal influences include Kurt Cobain, Joan Jett, and Robert Plant. After the band announced they had signed to Interscope Records, two new recordings of demo songs were posted on their Myspace account.


On December 30, 2009, the band released a new promo song entitled "Make Me Wanna Die". The song was offered as a limited-time free download for fans on their Interscope Records website. The band launched "Make Me Wanna Die" on the soundtrack and it appeared in the end credits of the 2010 film Kick-Ass. The song was the band's first single, and was released on May 17, 2010, with the debut album set to be released in August. On April 9, 2010, they performed during the "Vans Warped Tour 2010 Kick-Off Party" and performed at The Bamboozle music festival on May 1, 2010. They played the entire Warped Tour 2010.


This article uses material from the Wikipedia article "The Pretty Reckless", which is released under the Creative Commons Attribution-Share-Alike License 3.0.