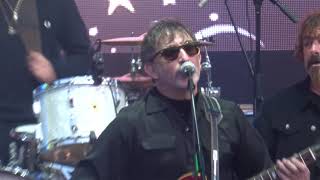 About The Lightning Seeds


The Lightning Seeds are an English rock band formed in Liverpool in 1989 by Ian Broudie , formerly of the bands Big in Japan, Care, and Original Mirrors. Originally a studio-based solo project for Broudie, the Lightning Seeds expanded into a touring band following Jollification . The group experienced commercial success throughout the 1990s and are well known for their single "Three Lions", a collaboration with David Baddiel and Frank Skinner which reached No. 1 in the UK in 1996 and 1998. The single once again reached No. 1 in the UK in 2018.


Prior to the forming his own project, Ian Broudie had been a member of the 1970s post-punk band Big in Japan and the new wave bands Original Mirrors and Care. By the late 1980s, Broudie was better known as a producer than as a musician, and had produced albums for new wave and alternative rock artists such as Echo & the Bunnymen, Wall of Voodoo and the Fall.


In 1989, Broudie began recording alone under the name "Lightning Seeds". The name derives from a misheard lyric from Prince's 1985 hit single "Raspberry Beret", in which Prince sings the line "thunder drowns out what the lightning sees". Broudie performed all vocals and instruments on the band's first album, 1989's Cloudcuckooland, which he also produced. The Lightning Seeds achieved success with their debut single, the psychedelic hit "Pure", which reached the top 20 in the UK, and the top 40 of the Billboard Hot 100 in the United States. Both "Pure" and followup single "All I Want" also reached the Modern Rock Tracks top 10.


The album Sense featured the song "The Life of Riley", written by Broudie for his son, which reached No. 28 on the UK Singles Chart. An instrumental version of the song later became better known as the BBC TV theme for the Goal of the Month competition. The album Sense would mark Broudie's first Lightning Seeds songwriting collaborations with former Specials singer Terry Hall.


This article uses material from the Wikipedia article "The Lightning Seeds", which is released under the Creative Commons Attribution-Share-Alike License 3.0.