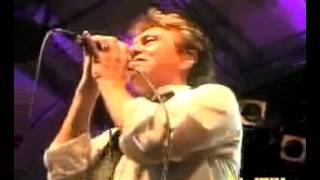 
The Hollies are a British rock group best known for their pioneering and distinctive three-part vocal harmony style. The Hollies became one of the leading British groups of the 1960s and into the mid 1970s. The band was formed by Allan Clarke and Graham Nash in 1962 as a Merseybeat-type music group in Manchester, although some of the band members came from towns further north in East Lancashire. Graham Nash left the group in 1968 to form the supergroup Crosby, Stills & Nash.


They enjoyed considerable popularity in many countries , although they did not achieve major US chart success until 1966 with "Bus Stop". The Hollies had over 30 charting singles on the UK Singles Chart, and 22 on the Billboard Hot 100, with major hits on both sides of the Atlantic that included "Just One Look", "Look Through Any Window", "I Can't Let Go", "Bus Stop", "Stop Stop Stop", "On a Carousel", "Carrie Anne", "Jennifer Eccles", and later "He Ain't Heavy, He's My Brother", "Long Cool Woman in a Black Dress", and "The Air That I Breathe".


The Hollies are one of the few UK groups of the early 1960s, along with the Rolling Stones, that have never disbanded and continue to record and perform. In recognition of their achievements, the Hollies were inducted into the Rock and Roll Hall of Fame in 2010.


The Hollies originated as a duo formed by Allan Clarke and Graham Nash, who were best friends from primary school and began performing together during the skiffle craze of the late 1950s. Eventually Clarke and Nash became a vocal and guitar duo modelled on American duo the Everly Brothers under the names "Ricky and Dane Young." Under this name, they teamed up with a local band, the Fourtones, consisting of Pete Bocking , John 'Butch' Mepham , Keith Bates , and Derek Quinn . When Quinn quit to join Freddie and the Dreamers in 1962, Clarke and Nash also quit and joined another Manchester band, the Deltas, consisting of Vic Steele on lead guitar, Eric Haydock on bass guitar, and Don Rathbone on drums, which had just lost two members .


The Deltas first called themselves "The Hollies" for a December 1962 gig at the Oasis Club in Manchester. It has been suggested that Eric Haydock named the group in relation to a Christmas holly garland, though in a 2009 interview Graham Nash said that the group decided just prior to a performance to call themselves "The Hollies" because of their admiration for Buddy Holly. In 2009, Nash wrote, "We called ourselves The Hollies, after Buddy and Christmas."


In January 1963, the Hollies performed at the Cavern Club in Liverpool, where they were seen by Parlophone assistant producer Ron Richards, who had been involved in producing the first Beatles session. Richards offered them an audition with Parlophone, but Steele did not want to be a "professional" musician and left the band in April 1963. For the audition, they brought in Tony Hicks to replace the departing Steele. Hicks played in a Nelson band called the Dolphins, which also featured Bobby Elliott on drums and Bernie Calvert on bass. Not only were the Hollies signed by Richards, who would continue to produce the band until 1976 and once more in 1979, but a song from the audition, a cover of the Coasters' 1961 single " Just Like Me", was released as their debut single in May 1963 and hit No.25 on the UK Singles Chart.


This article uses material from the Wikipedia article "The Hollies", which is released under the Creative Commons Attribution-Share-Alike License 3.0.