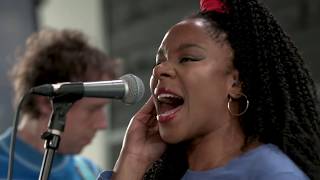 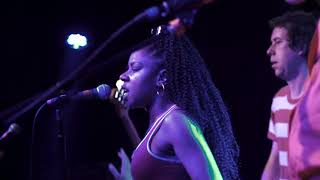 The Go! Team live on PressureDrop.tv 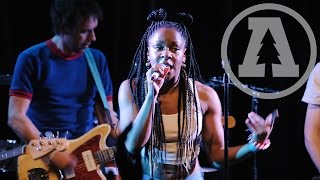 About The Go! Team

The Go! Team are an English six-piece band from Brighton, England. The band initially began as a solo project conceived by Ian Parton; however, after the unexpected success of The Go! Team's debut album, Thunder, Lightning, Strike, Parton recruited band members to play for live performances and subsequent albums. Musically, the band combines indie rock and garage rock with a mixture of funk and Bollywood soundtracks, double Dutch chants, old school hip hop and distorted guitars. Their songs are a mix of live instrumentation and samples from various sources. The band's vocals also vary between performances: while live vocals are handled mostly by lead vocalist Ninja, vocals on record also feature sampled and guest voices.


The Go! Team began as a solo project conceived by documentary film director Ian Parton, who wanted to create music incorporating Sonic Youth-style guitars, double Dutch chants, Bollywood soundtracks, old school hip hop and electro. These ideas led towards the recording of his first extended play, Get It Together EP, which was released in 2000 by Pickled Egg Records. The EP received regular airplay by DJ John Peel, one of the original BBC Radio 1 DJs.


The Go! Team's first album, Thunder, Lightning, Strike, was released in the UK and Europe on the Memphis Industries label in September 2004. The album was recorded at Parton's parents' house while they were away on holiday, with him playing all live instruments himself. The album was co-produced and mixed by Ian's brother Gareth Parton at The Fortress Studios and Bluestone in London. Prior to the album's release, Ian Parton had failed to clear any of the samples used in the album, believing it wouldn't attract much attention. However, the album received widespread critical acclaim upon release, and the album was nominated for the Mercury Prize in 2005. Following the album's unexpected success, the Parton brothers later had to work with a musicologist to write around or recreate samples they could not use. The revised album was reissued with two additional bonus tracks in the United Kingdom and the United States the following year. The album peaked at number 48 on the UK Albums Chart in February 2006.


In June 2004, Ian Parton recruited a band to play the Accelerator Festival in Sweden after having been asked to play when no band existed. The new members of the band included British rapper Ninja, who took the role of lead vocalist; guitarist and drummer Sam Dook; drummer Chi Fukami Taylor; bassist Jamie Bell; and musician Silke Steidinger. Steidinger was later replaced by multi-instrumentalist Kaori Tschuida in late 2005. The live band is a "separate entity" to the original studio vision, as the performances became radically different from the recordings, particularly due to Ninja's freestyled vocals over what had been instrumental studio tracks.


The band's popularity increased with the re-issue of "Ladyflash" in the UK, resulting in national primetime airplay on radio stations such as BBC Radio 1, Xfm and the Atlanta, US based 99X. The song "Get It Together" from Thunder, Lightning, Strike also received popularity, being featured in trailers for the video game LittleBigPlanet. The track "The Power Is On" from Thunder, Lightning, Strike was included in "The Pitchfork 500: Our Guide to the Greatest Songs from Punk to Present," and was also used in an Atlanta Falcons' NFL Play60 commercial.


On 13 May 2007, The Go! Team announced the release of their new single and subsequent album on their website. The album's lead single, "Grip Like a Vice", was released on 2 July 2007, and the new album, called Proof of Youth, was released on 10 September in the UK and a day later in the US. The album featured samples and live band recordings, as well as special guests such as Chuck D, Solex, and ex-Bonde do Rolê singer Marina Ribatski. The second single from Proof of Youth, "Doing It Right", received daytime radio play from BBC Radio 1 and soundtracked the BBC's launch of the iPlayer.


The album received mostly positive reviews from critics; Rob Mitchum of Pitchfork gave the album a 7.2 out of 10, expressing "Proof of Youth mostly recaptures the enthusiasm and unique sensibility of Thunder, Lightning, Strike, further filling that niche for lo-fi sample-based old-school-noise-rap we never knew we needed filling." Jeff Weiss of Stylus Magazine gave Proof of Youth a B, considering the album a "satisfying sophomore effort", but criticising the band's inability to sonically expand from Thunder, Lightning, Strike.


This article uses material from the Wikipedia article "The Go! Team", which is released under the Creative Commons Attribution-Share-Alike License 3.0.