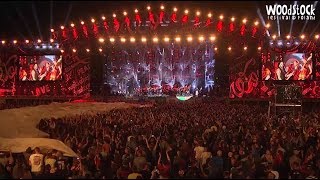 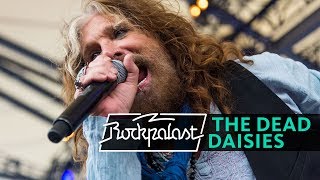 About The Dead Daisies


The Dead Daisies were formed by Jon Stevens and David Lowy in 2012. The singer-songwriter and guitarist got together after David Edwards, ex-manager of INXS, reintroduced them.


The band's self-titled debut album was recorded in two weeks at Wishbone Studios in Los Angeles in 2013 with American producer/engineer and multi-instrumentalist John Fields. The album was released in North America on 9 August 2013 through Caroline/Universal, and later released in the United Kingdom in mid-November 2013. "Lock N' Load", their first single, was co-written by Slash, who also played guitar on the track. The song was a Rolling Stone magazine Daily Download on 25 July 2013 and was also available on the website of BBC Radio 2. The song's music video appeared on more than 20 outlets including Much Music. The single was released in the United Kingdom on 28 October 2013.


The band toured in 2013, including opening for ZZ Top and joining Aerosmith on their Australian and New Zealand tour. This was followed by the 25-date Rockstar Energy Drink Uproar Festival in August and September 2013 . These shows were performed by the first full lineup of the band, which consisted of Lowy and Stevens along with drummer Frank Ferrer, guitarist Richard Fortus, bassist Marco Mendoza , and pianist Dizzy Reed . Lead singer Stevens performed for a while with casts on his hand and leg as a result of an injury sustained when escaping from a crocodile on a fishing excursion in Australia.


In September 2013, the Dead Daisies replaced Frank Ferrer with Brian Tichy on drums but in the fall of 2013 played 18 shows in the United Kingdom with the Black Star Riders with new recruits Charley Drayton on drums and Darryl Jones on bass . On 20 November, they played the Underworld rock club in Camden, their first UK show as headliners. The band finished off their touring schedule in 2013 with a gig at The Barby in Tel Aviv, Israel.


"Lock N' Load" was also played at football stadiums, including at Wembley Stadium during the sold out NFL American football game between the Jacksonville Jaguars and the San Francisco 49ers on 27 October.


This article uses material from the Wikipedia article "The Dead Daisies", which is released under the Creative Commons Attribution-Share-Alike License 3.0.