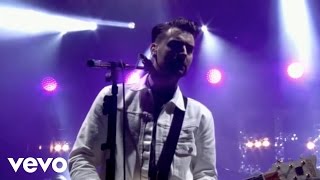 
Courteeners are an English band formed in Middleton in 2006 by Liam Fray , Michael Campbell , Daniel "Conan" Moores and Mark Cuppello ; the latter was replaced by the band's producer Joe Cross in 2015. They previously toured with pianist Adam Payne, who has been featured on every album, but in 2019 was replaced with Elina Lin. In December 2012, the band dropped "The" from their name, continuing simply as "Courteeners".


All the music and lyrics for the Courteeners' songs are written by the band's frontman Liam Fray. He claims that all of the songs he has written are about personal experiences.


At first Fray studied business studies at university, however soon realised it was a lot harder than he thought and not what he wanted to do. Therefore, he chose to study creative writing as he enjoyed writing poetry and short stories, but not reading. While at the University of Salford , Fray started performing acoustic sets as a singer-songwriter around bars and at open-mic nights in Manchester. After getting positive reactions from the crowd, Fray decided to leave university and form a band. He recruited long-time friend and neighbour Michael Campbell, who had never played the drums before. They played as 'Liam Fray' until Moores and Cuppello joined the band.


Their first gig was at the Manchester Roadhouse in October 2006, and the band went from strength to strength in Manchester, largely through a word-of-mouth following brought on by extensive gigging and television publicity. The Courteeners released their debut single "Cavorting," on August 6th 2007 by Loog Records. A second single, 'Acrylic' was released on 22 October 2007 reaching number 44 in the UK chart.


This article uses material from the Wikipedia article "The Courteeners", which is released under the Creative Commons Attribution-Share-Alike License 3.0.