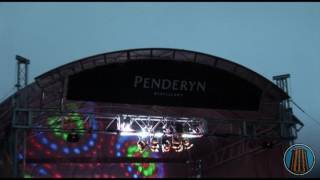 The Blockheads Live At The Cwmafan Music Festival 2017
Share Concert


The Blockheads are an English rock band formed in London in 1977. Originally fronted by lead singer Ian Dury as Ian Dury and the Blockheads or Ian and the Blockheads, the band has continued to perform since Dury's death in 2000. Current members include Derek "The Draw" Hussey , Chaz Jankel , Norman Watt-Roy , Mick Gallagher , John Turnbull John Roberts . If Watt-Roy is unavailable, due to a conflict with Wilko Johnson dates , his duties are often covered by Nathan King. There is a rolling line-up of saxophonists that includes Gilad Atzmon, Terry Edwards or Dave Lewis and from time to time, the original sax player, Davey Payne.


The band are best known for their hit singles, recorded with Dury, "What a Waste", "Hit Me with Your Rhythm Stick", "Reasons to be Cheerful, Part 3", and "Sex & Drugs & Rock & Roll".


In 1974, Radio Caroline's Ronan O'Rahilly set up the pop group The Loving Awareness Band, comprising John Turnbull and Mick Gallagher both formerly of 1960s psychedelic rock band Skip Bifferty with the session musicians Norman Watt-Roy and Charlie Charles . In 1976, The Loving Awareness Band released their only album, Loving Awareness , on O'Rahilly's label More Love Records. The album has appeared on CD more than once, although these reissues have been sourced from a mint vinyl pressing rather than from the original master tapes.


The Loving Awareness Band broke up in 1977 and Watt-Roy and Charles joined a new band being formed by Ian Dury, who had begun writing songs with pianist and guitarist Chaz Jankel . With Jankel fashioning Dury's lyrics into number of songs, the two began recording with Charles, Watt-Roy, Gallagher, Turnbull and former Kilburn and the High Roads saxophonist Davey Payne. An album was recorded, but was of no interest to major record labels. Next door to Dury's manager's office, however, was the newly formed Stiff Records, a perfect home for Dury's maverick style.


The band was invited by Stiff to join the "Live Stiffs Tour", and the band Ian Dury and the Blockheads was born, with the name ostensibly taken from the song of the same name which portrayed a drunken Essex Untermensch stereotype:


This article uses material from the Wikipedia article "The Blockheads", which is released under the Creative Commons Attribution-Share-Alike License 3.0.