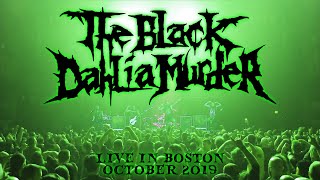 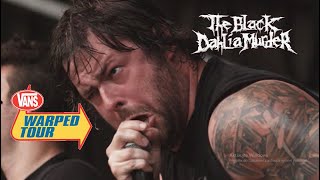 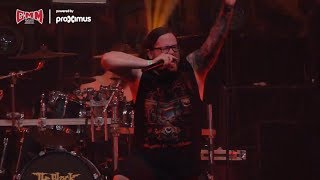 About The Black Dahlia Murder


The Black Dahlia Murder is an American melodic death metal band from Waterford, Michigan, formed in 2001. Their name is derived from the 1947 unsolved murder of Elizabeth Short, often referred to as Black Dahlia. The band currently comprises lead vocalist Trevor Strnad, rhythm guitarist Brian Eschbach, bassist Max Lavelle, drummer Alan Cassidy, and lead guitarist Brandon Ellis. Out of the eight studio albums they have released to date, the last seven have charted on the U.S. Billboard 200, with their fifth album Ritual peaking at No. 31 in 2011, marking them as one of the most popular contemporary American extreme metal bands. Their ninth and latest album Verminous was released on April 17, 2020.


The Black Dahlia Murder began its inception during late 2000 and gained the final band lineup in January 2001. The group released their demo entitled What a Horrible Night to Have a Curse, and a four-track EP, A Cold-Blooded Epitaph, the latter of which the group released on Lovelost Records. After appearing in concerts such as the Milwaukee Metal Fest, The Black Dahlia Murder signed to Metal Blade Records in 2003.


Bassist Ryan "Bart" Williams left his former band, Detroit's Today I Wait, to tour with the Black Dahlia Murder. After touring with the band on their co-headlining gig with Throwdown and their European dates with Liar, he joined the group full-time, replacing former bassist David Lock. Frontman Trevor Strnad said that Lock was fired for incompetency. Williams was one of two engineers on the band's first full-length album, Unhallowed.


The band's second album Miasma was released on July 12, 2005 and peaked at No. 118 on the Billboard 200. After touring for Miasma, drummer Zach Gibson left the band along with Pierre Langlois. While Gibson went on to join Abigail Williams, Langlois left the band for a more secure lifestyle, and the band finished their search for a replacement drummer when they found former All That Remains drummer, Shannon Lucas. The group played at Ozzfest 2005.


Their third album, entitled Nocturnal, was released on September 18, 2007. The album debuted at No. 72 on the Billboard 200. The Black Dahlia Murder announced via their MySpace profile that they were going on a U.S. tour with Cannibal Corpse to promote their new album Nocturnal and celebrate the 25 years that Metal Blade Records had been in business. They were joined by label-mates The Red Chord, Aeon, The Absence, and Goatwhore. In January/February 2008, the band embarked on a U.S. headlining tour with 3 Inches of Blood, Hate Eternal, and Decrepit Birth, followed by another alongside Brain Drill and Animosity. They were on Hot Topic's "Summer Slaughter Tour" with Kataklysm, Cryptopsy, Vader, Whitechapel, and Despised Icon.


Their longtime lead guitarist, John Kempainen left the band and was replaced by Ryan Knight during the beginning of 2009. In May 2009, The Black Dahlia Murder released their first DVD, "Majesty". The DVD contains a documentary and live footage from the Summer Slaughter tour and their tour supporting Children of Bodom in late 2008. The DVD also contains all of their music videos and behind the scenes footage.


This article uses material from the Wikipedia article "The Black Dahlia Murder", which is released under the Creative Commons Attribution-Share-Alike License 3.0.