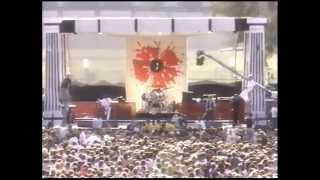 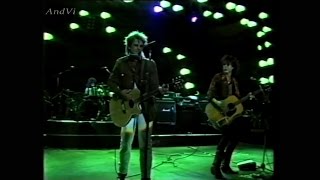 
The Alarm are a Welsh rock band that formed in Rhyl, Wales, in 1981. Initially formed as a punk band, The Toilets, in 1977, under lead vocalist Mike Peters, the band soon embraced rock and included marked influences from Welsh language and culture. By opening for acts such as U2 and Bob Dylan, they became a popular new wave pop band of the 1980s.


In 1977 a punk band was formed in Rhyl, Wales, billed as "The Toilets". It contained Mike Peters , Glyn Crossley , Richard "O'Malley" Jones and Nigel Buckle . The band ceased to exist in 1978; they renamed themselves Quiasimodo and played note-for-note covers of The Who's Live At Leeds with guitarist Dave Sharp. This group also included Karl Wallinger on keyboards. Later the group named themselves Seventeen, with both Mike Peters and Nigel Buckle alongside Eddie MacDonald . Seventeen began as a three-piece but were soon joined by guitarist David Kitchingman and became a power pop mod band who released a single in March 1980 and toured with the Stray Cats later that year. They played their last concert together under the new name of "Alarm Alarm" in January 1981 at the Half Moon, Herne Hill, London, but this would also be the last time this name was used.


The band soon reformed under the new name of The Alarm , and played their first gig at The Victoria Hotel, Prestatyn, north Wales, on 6 June 1981, opening with "Shout to the Devil", which would later appear on the Declaration album.


They moved from North Wales to London in September 1981, and the band recorded a one-off 7" single. One thousand copies were pressed that month, featuring "Unsafe Building" on the "electric" side and "Up For Murder" on the "acoustic" side. The single was noticed by Mick Mercer, who featured it as his single of the month in his ZigZag magazine. The band played a show with The Fall in December 1981, where a journalist from Sounds noticed them. This journalist attended the band's next show, at Upstairs at Ronnie's in London's West End. Also at this show was a representative of Wasted Talent, who arranged a meeting between the band and Ian Wilson, U2's agent. Wilson arranged another show in order to assess the band's quality, was impressed, and became their manager soon after. To celebrate, The Alarm played with U2 at the Lyceum Ballroom on 22 December 1981.


In 1982, the band began to record demos for various record labels, but had little success. At this point, they were playing with three acoustic guitarists. The band were eventually offered a deal by I.R.S. Records. This forced them to make a decision on who was to play which musical instrument, and it was decided that Peters would concentrate on singing, with Sharp on guitar and Macdonald playing bass.


This article uses material from the Wikipedia article "The Alarm", which is released under the Creative Commons Attribution-Share-Alike License 3.0.