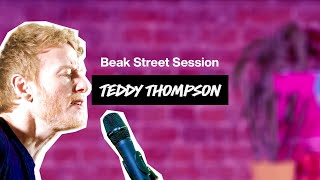 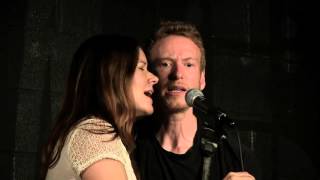 Teddy Thompson - I Thought That We Said Goodbye - Live at McCabe's 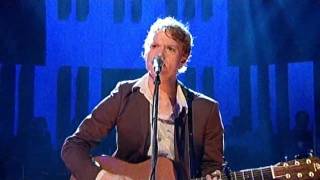 
Teddy Thompson is a British folk and rock musician. He is the son of folk rock musicians Richard and Linda Thompson and brother of singer Kamila Thompson. He released his first album in 2000.


Teddy Thompson was born in 1976 in a London Sufi commune to folk rock musicians Richard and Linda Thompson, both major musical figures in the English folk rock scene from the 1960s on. He is the brother of singer Kamila Thompson. He formed his own band at the age of 18. He moved to Los Angeles to pursue his music career, which included work as a singer and guitar player in his father Richard's band during the 1990s. He appears on at least three Richard Thompson Band recordings from that time: You? Me? Us?, the live album Celtschmerz and Mock Tudor , as well as singing a duet on the track "Persuasion", which appeared on Richard's best-of compilation Action Packed . He can be seen performing in his father's band on a number of internet videos from as early as 1993, including an appearance on the BBC's Jools Holland show. He coaxed his mother out of retirement and co-produced her first album in 17 years, Fashionably Late.


In 2000 Thompson released his debut album, Teddy Thompson, which received much critical acclaim but little commercial success. Between the time of his debut album and follow-up, he released the moderately successful EP Blunderbuss and toured as part of Rosanne Cash's band. His song "Love Her for That" was featured in the 2002 film 40 Days and 40 Nights.


In 2005, Thompson released his second full-length album, Separate Ways. It has a strong "second-generation" artist theme, featuring both Rufus and Martha Wainwright, who are close friends of Thompson. He has toured and recorded with both the Wainwrights, including Rufus' 2003 album Want One. Teddy and Rufus recorded a version of "King of the Road" for the 2005 film, Brokeback Mountain, with Thompson also contributing a solo track: "I Don't Want to Say Goodbye". Separate Ways features Dave Mattacks, Tony Trischka and Garth Hudson of The Band and was produced by Brad Albetta, who also produced Martha Wainwright's much-lauded debut album. In 2014 the track "In My Arms" was featured in the 2013 British romantic comedy movie The Love Punch.


Teddy's third album, Upfront & Down Low, was released on Verve Forecast in the United States on 17 July 2007, and in the UK and Europe later in 2007. The album contains covers of many of Teddy's favourite country songs, plus one of his own compositions, entitled "Down Low". It offers covers of country classics such as George Jones' "She Thinks I Still Care," Ernest Tubb's "Walking the Floor Over You", and Liz Anderson's " Strangers", made famous by Merle Haggard. Lesser-known songs include Felice and Boudleaux Bryant's "Change of Heart" , Dolly Parton's bittersweet "My Blue Tears," Bob Luman's "Let's Think About Living", and the Elvis Presley "I'm Left, You're Right, She's Gone." Six tracks feature string arrangements by English arranger Robert Kirby, renowned for his work with Nick Drake. "My Blue Tears" features strings arranged by Thompson cohort Rufus Wainwright. The only single taken off Upfront & Down Low was "Change of Heart".


Thompson's fourth studio album, A Piece of What You Need, was released via Verve/Forecast in June 2008, and contains all original songs. It was produced by Marius de Vries, whom Teddy met while recording background vocals on Rufus Wainwright's Want records in 2002.


This article uses material from the Wikipedia article "Teddy Thompson", which is released under the Creative Commons Attribution-Share-Alike License 3.0.