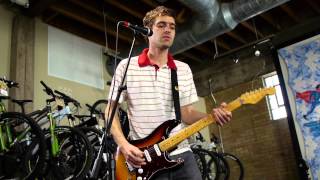 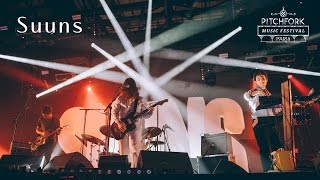 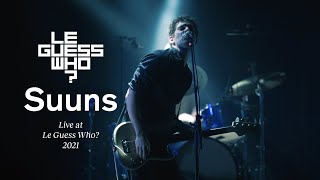 
Suuns is a Canadian rock band from Montreal. It was formed in mid-2007 when vocalist and guitarist Ben Shemie and guitarist and bassist Joe Yarmush got together to make some beats which quickly evolved into a few songs. The duo was soon joined by drummer Liam O'Neill and bassist and keyboardist Max Henry to complete the original line-up. The band signed to Secretly Canadian in 2010. Since 2010, Suuns saw the departure of Henry as an official member to pursue a scholastic path, and in 2020 they officially signed with Joyful Noise Recordings with their 2020 output of Fiction EP followed by their LP The Witness.


In 2009, Suuns entered Breakglass Studios with Jace Lasek of the Besnard Lakes co-producing and engineering, and recorded their first album, Zeroes QC. Upon its release in 2010, a reviewer of The New York Times said that it offered a "rigorous strategy behind every gorgeous onslaught." The album appeared on the !Earshot National Top 50 Chart. Suuns toured the East Coast in the summer with Parlovr and further established their fan base during their fall tour with Land of Talk and The Besnard Lakes.


Suuns spent much of 2011 performing in the U.S., Europe and Canada including New York's CMJ, SXSW, Primavera Sound, and over twelve other festivals. They also headlined a Canadian tour and co-headlined a North American tour with PS I Love You. During a rare couple weeks off in Montreal, Suuns decided to take a risk to experiment and create two new, unusual songs. "Red Song" and "Bambi" were extended pieces unlike Suuns' previous works.


In 2012, they were the curators for the Sonic City Festival in Belgium. Other festival performances included the National's ATP Festival, London's Village Underground, and Paris's Point Ephemere. The band also spent much of the year preparing to release their second album, Images Du Futur, which they announced in November, and gearing up for the busy year ahead. They finished off 2012 with a month-long tour from mid-November through mid-December.


The band kicked off the year with a January release of new music video "Edie's Dream" and a February release of the video for "2020". Their second album, Images Du Futur, was released by Secretly Canadian on March 5 in the middle of Suuns' international three-month tour featuring We Are Wolves and Plants and Animals. The Line of Best Fit describes the album: "Images Du Futur is exciting in a way that few albums manage to be, dangerous and compelling like a first cigarette or fumbled sexual encounter, and nothing here quite seems real: these ten tracks exist in a half-light, a nocturnal fog a step removed from lucid thought. And a long, long way from anything routine." In June 2013, the album was longlisted for the 2013 Polaris Music Prize.


Suuns and Jerusalem In My Heart released their self-titled album worldwide on April 14, 2015, and announced tour and festival dates. An Exclaim! interview states, "Recorded over a week in November 2012, the tracks mixed the strengths of both bands: the Eastern modes and drones plus the Arabic vocal delivered by Moumneh, and the keyboard arpeggios and incisive guitars of Suuns' Shemie and Joe Yarmush."


This article uses material from the Wikipedia article "Suuns", which is released under the Creative Commons Attribution-Share-Alike License 3.0.