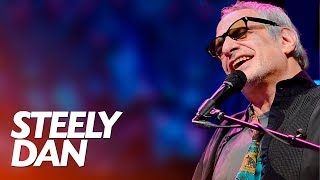 Steely Dan is an American rock band founded in 1971 at Bard College in Annandale-on-Hudson, New York by core members Walter Becker and Donald Fagen . Blending elements of rock, jazz, Latin music, R&B, blues and sophisticated studio production with cryptic and ironic lyrics, the band enjoyed critical and commercial success starting from the early 1970s until breaking up in 1981. Initially the band had a core lineup, but in 1974, Becker and Fagen retired the band from live performances altogether to become a studio-only band, opting to record with a revolving cast of session musicians. Rolling Stone has called them "the perfect musical antiheroes for the Seventies".


After the group disbanded in 1981, Becker and Fagen were less active throughout most of the next decade, though a cult following remained devoted to the group. Since reuniting in 1993, Steely Dan has toured steadily and released two albums of new material, the first of which, Two Against Nature, earned a Grammy Award for Album of the Year. They have sold more than 40 million albums worldwide and were inducted into the Rock and Roll Hall of Fame in March 2001.VH1 ranked Steely Dan at No. 82 on their list of the 100 Greatest Musical Artists of All Time.Rolling Stone ranked them No. 15 on its list of the 20 Greatest Duos of All Time. Founding member Walter Becker died on September 3, 2017, leaving Fagen as the sole official member.


Becker and Fagen met in 1967 at Bard College, in Annandale-on-Hudson, New York. As Fagen passed by a café, The Red Balloon, he heard Becker practicing the electric guitar." In an interview, Fagen recounted the experience: "I hear this guy practising, and it sounded very professional and contemporary. It sounded like, you know, like a black person, really." He introduced himself to Becker and asked, "Do you want to be in a band?" Discovering that they enjoyed similar music, the two began writing songs together.


Becker and Fagen began playing in local groups. One such group – known as the Don Fagen Jazz Trio, the Bad Rock Group and later the Leather Canary – included future comedy star Chevy Chase on drums. They played covers of songs by The Rolling Stones , Moby Grape , and Willie Dixon , as well as some original compositions.Terence Boylan, another Bard musician, remembered that Fagen took readily to the beatnik life while attending college: "They never came out of their room, they stayed up all night. They looked like ghosts—black turtlenecks and skin so white that it looked like yogurt. Absolutely no activity, chain-smoking Lucky Strikes and dope." Fagen himself would later remember it as "probably the only time in my life that I actually had friends."


After Fagen graduated in 1969, the two moved to Brooklyn and tried to peddle their tunes in the Brill Building in midtown Manhattan. Kenny Vance , who had a production office in the building, took an interest in their music, which led to work on the soundtrack of the low-budget Richard Pryor film You've Got to Walk It Like You Talk It or You'll Lose That Beat. Becker later said bluntly, "We did it for the money." A series of demos from 1968 to 1971 are available in multiple different releases, not authorized by Becker and Fagen. This collection features approximately 25 tracks and is notable for its sparse arrangements and lo-fi production, a contrast with Steely Dan's later work. Although some of these songs were re-recorded for Steely Dan albums, most were never officially released.


Becker and Fagen joined the touring band of Jay and the Americans for about a year and a half. They were at first paid $100 per show, but partway through their tenure the band's tour manager cut their salaries in half. The group's lead singer, Jay Black, dubbed Becker and Fagen "the Manson and Starkweather of rock 'n' roll", referring to cult leader Charles Manson and spree killer Charles Starkweather.


They had little success after moving to Brooklyn, although Barbra Streisand recorded their song "I Mean To Shine" on her 1971 Barbra Joan Streisand album. Their fortunes changed when one of Vance's associates, Gary Katz, moved to Los Angeles to become a staff producer for ABC Records. He hired Becker and Fagen as staff songwriters; they flew to California. Katz would produce all their 1970s albums in collaboration with engineer Roger Nichols. Nichols would win six Grammy Awards for his work with the band from the 1970s to 2001.


This article uses material from the Wikipedia article "Steely Dan", which is released under the Creative Commons Attribution-Share-Alike License 3.0.