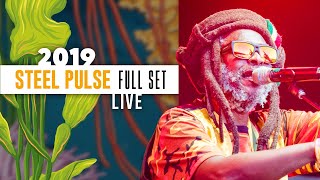 
Steel Pulse are a roots reggae musical band from the Handsworth area of Birmingham, England, which has many Afro-Caribbean, Indian and other Asian migrants. They originally formed at Handsworth Wood Boys School, and were composed of David Hinds , Basil Gabbidon , and Ronald McQueen ; along with Basil's brother Colin briefly on drums and Michael Riley . Steel Pulse were the first non-Jamaican act to win the Grammy Award for Best Reggae Album.


Basil Gabbidon and David Hinds became inspired to form Steel Pulse after listening to Bob Marley and The Wailers' Catch a Fire. The band formed in 1975; their debut single release "Kibudu, Mansetta And Abuku" arrived on the small independent label Dip, and linked the plight of urban black youth with the image of a greater African homeland. They followed it with "Nyah Luv" for Anchor. They were initially refused live dates in Caribbean venues in Birmingham due to their Rastafarian beliefs. During the popularization of punk rock in the mid-1970's, Steel Pulse began to play punk venues such as Anchor in London and The Electric Circus in Manchester in 1976.