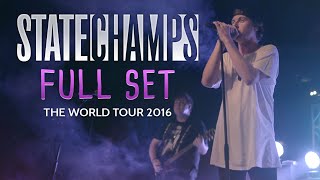 State Champs is an American rock band from Albany, New York, formed in 2010. They are currently signed to Pure Noise Records and have released three EPs and four full-length albums. They released an acoustic EP titled The Acoustic Things in October 2014 and their second full-length album Around the World and Back one year later, in October 2015. In May 2017, they released a deluxe version of their album Around the World and Back, along with a DVD of footage from their last few tours. Their 2013 full-length, The Finer Things, debuted at number 2 on the Billboard Heatseekers Albums chart. Their third album, Living Proof, was released on June 15, 2018. On May 13, 2022, the band released their fourth studio album Kings of the New Age.


State Champs formed in the spring of 2010 in Albany, New York by founding members lead guitarist Tyler Szalkowski and lead singer Derek DiScanio. Shortly after forming, they self-released EP 2010 in August, which was followed by their second self-released EP, Apparently, I’m Nothing, in January 2011. This EP contained several new songs and 2010 EP in its entirety. In July, the band toured with The Tired and True and Call It Fiction. In April 2012, interest in a demo of "Critical" helped the band gain a recording contract, a management company and a booking agency. On April 19, it was announced that the band signed to Pure Noise. In mid-June, the group recorded their next EP with Jay Maas at Getaway Recording Studio.


"Critical" was made available for streaming on July 12. In July and August, the band toured with With the Punches and Forever Came Calling on The PropertyOfZack Tour. "Remedy" was made available for streaming on August 9. The band released the Overslept EP in September through Pure Noise. In September and October, the band supported Handguns, then supported Citizen the following month. The band toured alongside Hit the Lights, A Loss for Words and With the Punches in December. The group then supported Vanna on their holiday tour, dubbed Home for the Holidays.


Originally, the band was supposed to support Chunk! No, Captain Chunk! on their Pardon My French Tour in March and April 2013; instead Chunk! No, Captain Chunk! went on tour with A Day to Remember, resulting in State Champs supporting Handguns on their Pardon My Angst tour in March. The band finished recording their debut full-length with producer Sam Pura at The Panda Studios and co-producer and former New Found Glory guitarist Steve Klein in Fremont, CA in May 2013. The group supported New Found Glory on their west coast tour in June, before supporting Cartel.


Their debut full-length album, The Finer Things, was released on October 8, 2013. It debuted at #2 on the Billboard Heatseekers chart, selling a little over 3,100 copies in the first week of release. To support the album, the band supported Motion City Soundtrack and Bayside on a fall tour in North America. The band spent a majority of 2014 touring in support of The Finer Things. The band started their busy 2014 schedule in March with their first full United States tour, opening for We Are The In Crowd, William Becket, Set It Off and Candy Hearts. Shortly after completing this tour, the band headed on tour overseas for the first time to support pop-punk band The Wonder Years and A Loss for Words. The tour routed throughout the UK and mainland Europe.


The band performed on the Kevin Says stage for the 2014 installment of the Vans Warped Tour occasionally playing the main Kia Soul stage. During the tour, it was announced that the band would also be co-headlining the 2014 Pure Noise Records Tour with Handguns, with support from Forever Came Calling, Front Porch Step, Heart to Heart and Brigades. On October 7, 2014, the band released an acoustic EP titled The Acoustic Things which featured acoustic versions of five tracks from The Finer Things as well as two new songs.


The band opened for All Time Low on their Future Hearts tour in spring 2015, and then opened for 5 Seconds of Summer's Rock Out With Your Socks Out Tour in June 2015 in Australia and New Zealand. On July 15, the band announced their second album, Around the World and Back, would be released on October 16; by November, the album had reached number 30 on the US Billboard Top 200 albums chart. The band began a co-headlining world tour in the UK with Neck Deep in February 2016, with support from Creeper and Light Years. The tour continued in the US and Canada in February and March with support from Knuckle Puck and Like Pacific. Official music videos were produced for two of the album's singles, "All You Are Is History" and "Secrets".


This article uses material from the Wikipedia article "State Champs", which is released under the Creative Commons Attribution-Share-Alike License 3.0.