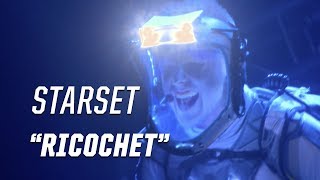 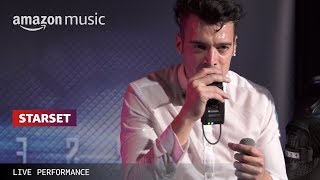 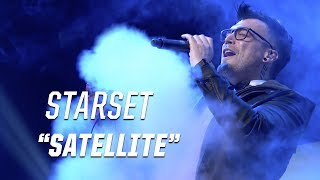 
Starset is an American rock band from Columbus, Ohio, formed by Dustin Bates in 2013. They released their debut album, Transmissions, in 2014 and their second album, Vessels, on January 20, 2017. The band has found success in expanding the ideas of their concept albums through social media and YouTube, with the band generating over $230,000 in revenue from views from the latter as of November 2016. Their single "My Demons" had accumulated over 280 million YouTube views in the same time period. Their most commercially successful song, "Monster", peaked at number 2 on the Billboard US Mainstream Rock Songs chart in May 2017. A third studio album, Divisions, was released on September 13, 2019.


Starset was formed in 2013 by Downplay vocalist Dustin Bates, who is also the band's lead singer, songwriter, and keyboardist. Bates' interest in astronomy was first fueled when acquiring his masters in electrical engineering as he studied at Ohio University. He completed research for the US Air Force and also taught at the International Space University. Bates created the fictional backstory for the band that forms the thematic basis for their music and multimedia. In the backstory, Starset was formed as part of a public outreach initiative by The Starset Society. The Society's aims were to alert the public about the contents of "the Message" the society obtained from a mysterious signal from space. Starset treats their backstory and The Starset Society as real in interviews, with few exceptions.


The band released their debut album Transmissions on July 8, 2014. The release debuted at number 49 on the US Billboard 200 charts, making it one of the highest debut albums for a rock band in 2014, and as of 2016, had sold over 79,000 copies. Three singles were released in promotion of the album; "My Demons," "Carnivore," and "Halo." They also performed well in the charts, reaching fifth, sixteenth, and sixteenth respectively on the Billboard US Mainstream Rock charts. The band later released an accompanying novel, The Prox Transmissions, further detailing Bates' fictional back-history of the Starset Society story.


Rob Graves, who produced Transmissions, announced on January 26, 2016 that the making of Starset's second record has "officially commenced." Along with the announcement of European tour dates supporting Breaking Benjamin, Starset announced their second album, which Bates said would be more stylistically diverse than the previous, ranging in genre from metal to pop. On October 4, 2016, Starset posted to their social media an image from a graphic novel produced by Marvel Comics as a tie-in to The Prox Transmissions. The 88-page graphic novel was co-written by Dustin Bates and Peter David, illustrated by Mirko Colak, and released in September 2017.


The album's first single, "Monster" was released on October 28, 2016. On November 4, 2016, Starset announced their upcoming album Vessels, which was released on January 20, 2017. The album debuted at number 11 on the Billboard 200 albums chart. The band spent much of 2017 touring in support of the album. The band toured with Black Satellite in the first half of 2017. In July 2017, the band performed at Seether's Shaun Morgan's "Rise Above Fest," alongside Shinedown and Halestorm. A second single from the album, "Satellite," was released in August 2017, peaking at number 12 on the Billboard Mainstream Rock Chart.


The band would continue touring through the first half of 2018, though Bates said he would likely take a break before pursuing a third album with the band. Instead, he was planning on releasing music under a different project name - MNQN - which would be far more electronic-based. Bates stated that he also had been working on some progressive rock styled music that he intends to release as well, though he did not disclose when, or if, it would be released under the Starset name. In April 2018, the band announced they had signed to Fearless Records, and released a music video for the Vessels track "Ricochet". An alternate acoustic recording of the song was also released shortly after.


This article uses material from the Wikipedia article "Starset", which is released under the Creative Commons Attribution-Share-Alike License 3.0.