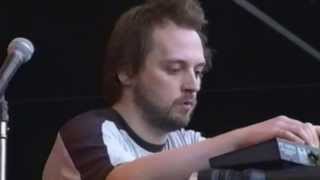 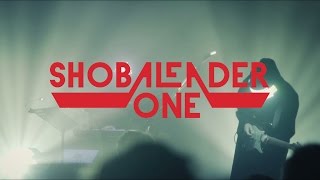 
Tom Jenkinson , known professionally as Squarepusher, is an English electronic musician, record producer, bassist, and DJ. His music spans several genres, including drum and bass, IDM, jazz, and electroacoustic music. His recordings are often typified by a combination of complex drum programming, live instrumental playing, and digital signal processing. Since 1995, he has recorded for Warp Records as well as smaller labels. He released his 1996 debut LP Feed Me Weird Things on Rephlex Records.


Tom Jenkinson grew up in Chelmsford, Essex. The first school he attended was affiliated with Chelmsford Cathedral giving him exposure to organ music; he took an interest in this and other music, and simultaneously became interested in music reproduction equipment. In 1986, Jenkinson went to the King Edward VI Grammar School in Chelmsford. One of his formative musical experiences came from seeing guitarist Guthrie Govan playing in the school's inter-house music competition. He developed a lasting friendship with Govan. Jenkinson joined his first band at 12, a Metallica influenced thrash metal group consisting of several other pupils from the school. Over subsequent years Jenkinson played bass guitar in various local bands playing numerous gigs around East Anglia and London, and took part in some studio recordings.


In August 1993, Jenkinson recorded a piece named "O'Brien"; with his friend Hardy Finn he raised enough money to release it with additional material on a vinyl 12". Jenkinson and his friends took the copies of the record to various local record shops but found reactions disappointing. By 1995 he was playing live sets, including a performance at Eurobeat 2000 at Turnmills in 1995, and "O'Brien" was part of his set list.


In late 1994, Jenkinson began to pursue his fascination for integrating breakbeats into electronic music. The first recordings using Jenkinson's new set up were released on the Spymania label. The first EP was called Conumber, the second Alroy Road Tracks, under the pseudonym "The Duke of Harringay". Jenkinson began receiving invitations from clubs to play regular sets, including The Sir George Robey in Finsbury Park. He then placed two songs on Worm Interface releases, "Dragon Disk 2" and the "Bubble and Squeak" EPs.


At this time, Jenkinson was becoming obsessed with bringing a "dark psychedelia" to drum and bass . During this period Jenkinson also made a remix for Ninja Tune's DJ Food, which featured on the EP "Refried Food". The remix led Ninja Tune to offer Jenkinson a record contract, which along with an offer from Belgium's R&S records he declined in favour of a contract offered by Warp Records, which was partially instigated by Richard D. James. Correspondence between James and Jenkinson sprung up after meeting at The George Robey. The resulting meeting led to Jenkinson's first hearing of the Hangable Auto Bulb EP which Richard had brought with him. But the meeting also facilitated James initial selection of Jenkinson's tracks that went on to form the Feed Me Weird Things album released on Rephlex Records in 1996.


This article uses material from the Wikipedia article "Squarepusher", which is released under the Creative Commons Attribution-Share-Alike License 3.0.