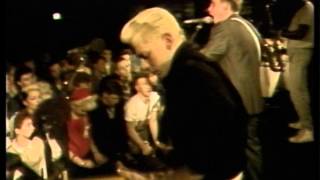 Spear of Destiny - Grapes of Wrath (Live at The Haçienda in Manchester, UK, 1983)
Share Concert

About Spear of Destiny


Spear of Destiny is a British rock band, founded in 1982 by singer and songwriter Kirk Brandon and bassist Stan Stammers . It has had an ever-changing line-up through the years.


Formed in 1982, the band's original line-up consisted of Kirk Brandon, Stan Stammers, Chris Bell and Lascelles James. In late 1983, this line-up was superseded by Dolphin Taylor on drums, Alan St Clair on guitar, John Lennard on sax and Neil Pyzer on keyboards and additional saxophone. In 1984, John Lennard was replaced by Mickey Donnelly on saxophone.


Spear of Destiny recorded one session for John Peel .


"The band played a punk-influenced form of power rock, which often had an anthemic feel."


Their second album, One Eyed Jacks was released in 1984. It reached No. 22 in the UK Albums Chart Spear of Destiny’s reputation in the mid-1980s depended to a greater extent on their live performances.


This article uses material from the Wikipedia article "Spear of Destiny", which is released under the Creative Commons Attribution-Share-Alike License 3.0.