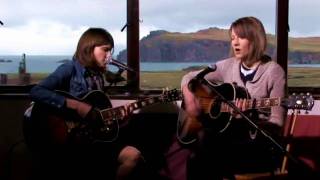 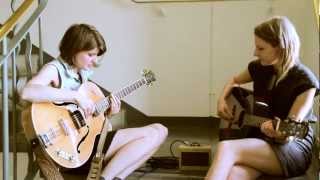 
Smoke Fairies are a British band hailing from Chichester.


Blamire and Davies met at school in Sussex during the late 1990s. They spent 2002 in New Orleans, where they absorbed American blues music. When they returned to England they discovered British folk music at the Sidmouth Folk Week Festival while working as car park attendants. They later settled in Vancouver, British Columbia, Canada, for a year before returning to London to start performing.


In 2007, Smoke Fairies toured the UK in support of Bryan Ferry and the following year they released their debut single, "Living with Ghosts", on Music for Heroes.Richard Hawley was an early supporter of the act, saying they were "frankly the best thing I have heard in years". They supported Hawley on his Truelove’s Gutter Tour of the UK in October 2009.


In December 2009, Smoke Fairies became the first UK act to release a single on Jack White's label Third Man Records. The double A-side single, "Gastown" / "River Song", was produced by Jack White who also played guitar and drums. Smoke Fairies performed at the 2010 South by South West festival in Texas and supported Laura Marling on a month-long tour of the United States.


They signed to V2 Records/Cooperative Music and released their debut album Through Low Light and Trees in September 2010, latterly self-released in the United States in June 2011 via Year Seven Records. The album was produced by long-term PJ Harvey collaborator Head and recorded at Sawmills Studio in Cornwall, United Kingdom.


To promote the album the band was invited to record a live session for Marc Riley on BBC Radio 6. And invited back for another session a few months later. The duo also recorded a live session with their band for John Kennedy’s "X-Posure" on XFM. In November 2010, Smoke Fairies’ recording of Neil Young's "Alabama" appeared on a special Mojo album to mark the approaching fortieth anniversary of Young's Harvest LP.


This article uses material from the Wikipedia article "Smoke Fairies", which is released under the Creative Commons Attribution-Share-Alike License 3.0.