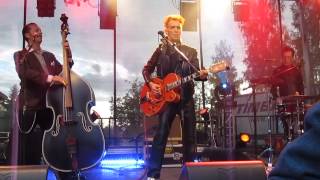 
James McDonnell , known by the stage name Slim Jim Phantom, is the drummer for Stray Cats. Alongside bandmates Brian Setzer and Lee Rocker, he spearheaded the neo-rockabilly movement of the early 1980s.


Phantom currently plays in the band Kat Men with Imelda May guitarist Darrel Higham and is the host of the weekly radio show "Rockabilly Rave-up" on the satellite radio station Underground Garage.


Born in Brooklyn and raised in Massapequa, New York, Phantom grew up listening to his parents' jazz records and began playing drums by the age of ten. He took lessons with Mousie Alexander, who played with Benny Goodman, studying jazz and working through books by Jim Chapin and Ted Reed.


By the late 1970s, he was playing in bands with his childhood friend, bassist Lee Rocker. They soon joined forces with guitarist Brian Setzer to form Stray Cats. When performing with Stray Cats, Phantom did not sit behind a standard drum kit like most drummers, but instead opted to play in a standing position with a minimalist set-up of bass drum, snare drum, hi-hat, and crash cymbal.


This article uses material from the Wikipedia article "Slim Jim Phantom", which is released under the Creative Commons Attribution-Share-Alike License 3.0.