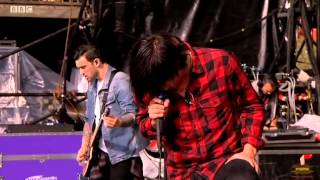 About Sleeping With Sirens

Sleeping with Sirens is an American rock band from Orlando, Florida, currently residing in Grand Rapids, Michigan. The band currently consists of Kellin Quinn , touring lead guitarist Tony Pizzuti, Nick Martin , Justin Hills and Matty Best . The band was formed in 2009 by members of For All We Know and Paddock Park. The group is currently signed to Sumerian Records and have released six full-length albums and an acoustic EP.


The band rose to fame with their song "If I'm James Dean, You're Audrey Hepburn", the lead single from their debut album, With Ears to See and Eyes to Hear, which was released in 2010. Their second album, Let's Cheers to This, was released in 2011 and became a breakout for the band, thanks to the popular single "If You Can't Hang", which was certified Gold on July 18, 2018, by the Recording Industry Association of America for selling 500,000 copies in the US. The group's third album, Feel, debuted at No. 3 on the US Billboard 200, and a fourth album, entitled Madness, was released on March 17, 2015, through Epitaph Records and spawned the single "Kick Me". Their fifth studio album, Gossip, was released on September 22, 2017, on Warner Bros. Records. Their sixth studio album, How It Feels to Be Lost, was released on September 6, 2019, through Sumerian Records. The group is known primarily for the versatility of vocalist Kellin Quinn's leggero tenor vocal range, along with the heavy sound used on their early work and the pop influences they used later into their career.


The band's first album, With Ears to See and Eyes to Hear, was released on March 23, 2010. It debuted at number 7 on Billboard's Top Heatseekers chart and at number 36 on Top Independent Albums. The album spawned three singles. One of those singles, "If I'm James Dean, You're Audrey Hepburn" earned the band much recognition, and on July 18, 2018, the single was certified gold by the RIAA after 500,000 copies were sold in the US.


On April 7, 2011, the band released "Do It Now Remember It Later", the first single off of the band's new album. Later in the month on April 28, the next single "Fire" was released. The band's second album Let's Cheers to This was released on May 10, 2011. On June 26, 2012, the band released its first acoustic EP, If You Were a Movie, This Would Be Your Soundtrack. On October 21, 2012, Sleeping with Sirens released a new single called "Dead Walker Texas Ranger" as a Halloween special.


In January 2013, the band entered the studio to record its follow up to Let's Cheers to This with an estimated release date of mid-2013. On April 23, 2013, the band released a new single called "Low" and revealed the new album's title as Feel and release date as June 4, 2013. In support of the new album, the band will be playing Kia main stage at the Vans Warped Tour 2013. On May 21, the band released the second single from Feel, "Alone" Featuring Machine Gun Kelly.


This article uses material from the Wikipedia article "Sleeping With Sirens", which is released under the Creative Commons Attribution-Share-Alike License 3.0.