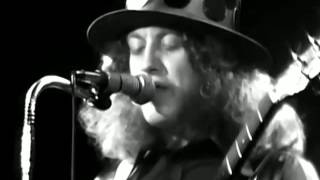 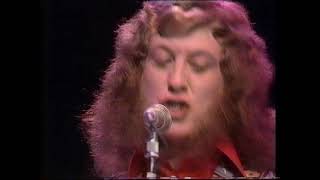 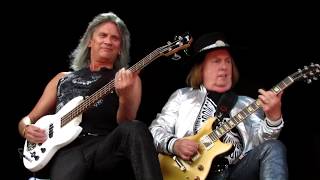 
Slade are an English rock band formed in Wolverhampton in 1966. They rose to prominence during the glam rock era in the early 1970s, achieving 17 consecutive top 20 hits and six number ones on the UK Singles Chart. The British Hit Singles & Albums names them the most successful British group of the 1970s based on sales of singles. They were the first act to have three singles enter the charts at number one; all six of the band's chart-toppers were penned by Noddy Holder and Jim Lea. As of 2006, total UK sales stand at 6,520,171, and their best-selling single, "Merry Xmas Everybody", has sold in excess of one million copies. According to the 1999 BBC documentary It's Slade, the band have sold over 50 million records worldwide.


Following an unsuccessful move to the U.S. in 1975, Slade's popularity in the UK waned, but was unexpectedly revived in 1980 when they were last-minute replacements for Ozzy Osbourne at the Reading Rock Festival. The band later acknowledged this to have been one of the highlights of their career. The original line-up split in 1992, but reformed later in the year as Slade II. The band have continued, with a number of line-up changes, to the present day. They have also shortened the group name back to Slade.


All the members of Slade grew up in the Black Country. Drummer Don Powell and bassist Jim Lea were born and brought up in Wolverhampton, lead vocalist Noddy Holder was born and brought up in nearby Caldmore, and lead guitarist Dave Hill moved to Wolverhampton from Holbeton as a child. Slade have released over 30 albums, three of which reached No. 1 in the UK Albums Chart. Their releases have spent 315 weeks in the UK charts and they have earned 24 top-30 UK hits as of 2016.


Slade dominated the UK singles charts during the early 1970s, often outperforming chart rivals such as Wizzard, Sweet, T. Rex, Suzi Quatro, Mud, Gary Glitter, Roxy Music, and David Bowie. Slade achieved twelve Top 5 hit singles in the UK between 1971 and 1974, three of which went straight to #1. Of the 17 Top 20 hits between 1971 and 1976, six made No. 1, three reached No. 2 and two peaked at No. 3. No other UK act of the period enjoyed such consistently high chart placings in the UK Top 40, and this feat was the closest any group had come to matching the Beatles' 22 Top 10 records in a single decade . Slade sold more singles in the UK than any other group of the 1970s. In 1973 alone, "Merry Xmas Everybody" sold over one million copies globally, obtaining gold disc status. They toured Europe in 1973 and the US in 1974.


Slade moved to the US in the mid-1970s in an attempt to break into the American market and, although this was largely unsuccessful, they left their mark on a number of US bands who have since cited Slade as an influence. During the late 1970s, the band returned to the UK following years of commercial failure both at home and abroad. Slade's career was unexpectedly revived when the band were asked to perform at the 1980 Reading Festival when Ozzy Osbourne pulled out at the last minute. For the next two years, the band produced material tailored towards the heavy-metal scene and by 1984, they finally cracked the American market with the hits "Run Runaway" and "My Oh My." This new-found success did not last long, however, and despite a top-25 UK hit in the early '90s the band split shortly after in 1992.


This article uses material from the Wikipedia article "Slade", which is released under the Creative Commons Attribution-Share-Alike License 3.0.