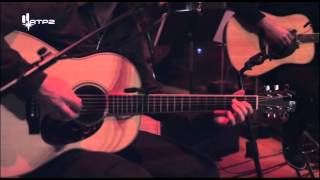 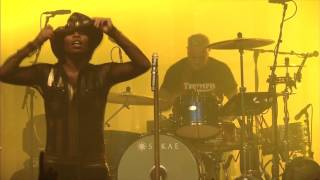 
Skunk Anansie are a British rock band whose members include Skin , Cass , Ace and Mark Richardson .


Skunk Anansie formed in 1994, disbanded in 2001 and reformed in 2009. The name "Skunk Anansie" is taken from Akan folk tales of Anansi the spider-man of Ghana, with "Skunk" added to "make the name nastier".


They are often grouped as part of a Britrock movement, running alongside Britpop. The band, in 2004, was named as one of the most successful UK chart acts between 1952 and 2003 by the Guinness Book of British Hit Singles & Albums, with a total of 142 weeks on both the singles and album charts ranking them at No. 491. When the book first published this annual top 500 list in 2000, it only involved weeks spent on the singles chart until 2004's 17th edition.


The group played its first gig at London's Splash club in March 1994. In 1995 they were voted Best New British Band by the readers of Kerrang! magazine. At the award ceremony that year drummer Mark Richardson met the band who were looking for a permanent replacement for Robbie France, so an audition was set up and the band was reformed. Soon after that, two of their songs, "Feed" and "Selling Jesus", appeared on the soundtrack of the film Strange Days in 1995. "Selling Jesus" became Skunk Anansie's controversial second song to receive radio play, following their first radio release "Little Baby Swastikkka". After hearing this song, radio personality Howard Stern claimed that the band would become a huge hit. Success continued for the band and they were also voted Kerrang!'s Best British Live Act in 1996. In 1997 they were nominated for Best Live Act and Best Group at the MTV Europe Music Awards.


The group played its first gig at London's Splash club in March 1994, subsequently taking six weeks to record its debut album, Paranoid & Sunburnt, with producer Sylvia Massy at a "haunted house" outside the city. The band's first single, "Selling Jesus," was featured on the soundtrack of the film Strange Days; Stoosh followed in 1996. Both albums were released under One Little Indian Records. After switching to the Virgin label in 1998, their third album, Post Orgasmic Chill, was released in 1999.


This article uses material from the Wikipedia article "Skunk Anansie", which is released under the Creative Commons Attribution-Share-Alike License 3.0.